The Go Team played a high-energy set at the Paradise last night that had the crowd jumping through a variety of tracks from their debut album, Thunder, Lightning, Strike, and their new release, Proof of Life.

Based in Brighton, England, TGT is a 6-person band that plays a mixture of pop, hip hop and funk reminiscent of the Beastie Boys and even a little Neneh Cherry (courtesy of Ninja, the freestyle lead vocalist).

This was the first time I saw the band, and they were great. Most of the members play multiple instruments and take turns with vocals, drums, guitars and keyboard (and one harmonica) while dancing around zealously on stage (as evidenced by these grainy cell phone pix).

The packed crowd didn't stop moving and jumping for the entire set. Added bonus: the show ran from roughly 10-11:30, and we were able to run nextdoor to T's Pub both before and after the concert to catch the Red Sox and BC games.

If you missed the show, check out their recent appearance on KCRW's Morning Becomes Eclectic show or the sample tracks on their MySpace page.

Thank goodness I don't have to work tomorrow!

OK - here is the official background story to all the random pictures I just posted.

Tonight I attended Edgefest, a series in which the Boston Pops perform with independent and alternative artists in an effort to draw a broader range of music enthusiasts to Symphony Hall.

The lineup included musical pieces from 25-year-old composer Nico Muhly and 34-year-old composer Felix Brenner - who paired with internationally acclaimed DJ Paul Oakenfold and 19-year-old Swede Andreas Brobjer on drums for a stunning latin-themed electronic piece with orchestral backup. Sounds over the top, but trust me, it was amazing.

After intermission, the Pops were joined by Hem (of Liberty Mutual fame). What a fantastic show. 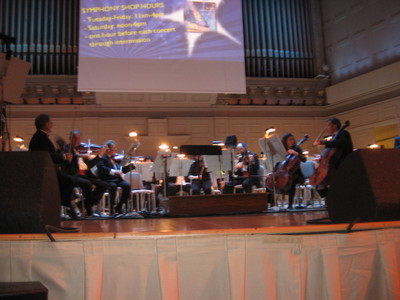 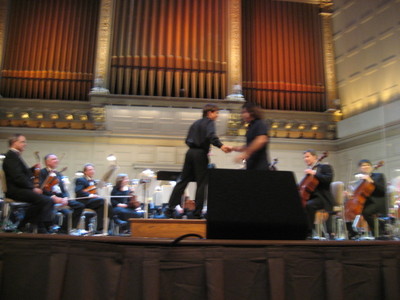 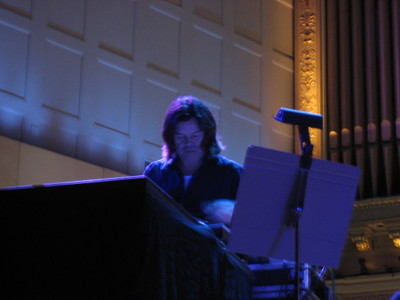 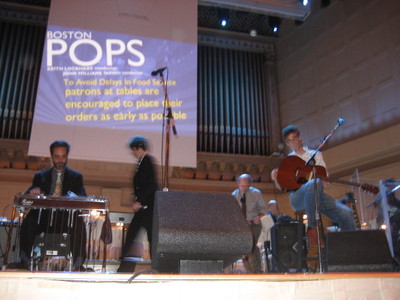 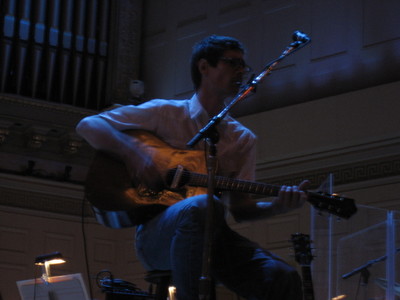 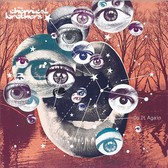 In anticipation of their new album, the Chemical Brothers have launched a  new website (built by digital agency 3ev) that allows fans to interact with the band as they tour the globe.

While the layout and navigation is quirky at times, they do a really nice job of integrating social computing principles into the experience.

Fans can access an abundance of information on the band, including over 200 tracks, web-only remixes, and commentary from the band members. A Google map application shows upcoming tour locations and provides tags for each gig so that fans can upload their own footage to YouTube and Flickr and have it appear on the site: 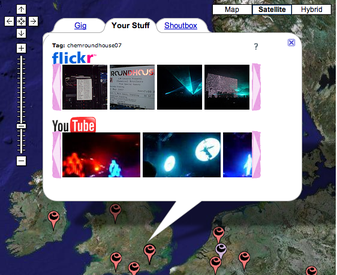 I really like the idea of the Chem Text service which displays fans' SMS messages right on the site, but I couldn't figure out how to text in my own message (perhaps they only publish the short code at the concerts? They should really make it available to all...).

And of course they provide all the requisite social computing tags (digg it, add to del.icio.us, technorati, newsvine...).

On Saturday night we attended the 9th annual WONDER-Full™ Party: A Tribute To The Wonder of Stevie, which takes place in commemoration of Stevie Wonder’s May 13th birthday weekend.

It has taken place in Japan, Europe, East and the West coasts of the U.S. - this year at The Sugar Factory in the Williamsburg area of Brooklyn. Once home to the famed Domino Sugar Factory (built ~1857), it's now a 14,000 square foot, multi-level entertainment venue known for showcasing a variety of music, visual arts, and interactive installations by known and up-and-coming artists.

DJs Spinna and Bobbito spun all Stevie Wonder exclusives, including covers, samples and remixes, while the energetic crowd danced and sang along to the lyrics. While Wonder didn't make a personal appearance this year (to my knowledge), he is aware of the annual event and has called in to speak to the crowd live in the past. 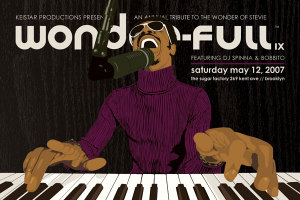 It's the first Saturday of the month, which means that DJ Paul Foley is spinning at the Good Life downtown. 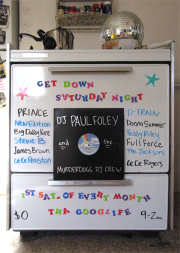 If you're in Boston this Saturday night, and looking to hear some great house music, then head on over to The Good Life on Kingston Street around 10pm and check out +Remedy.

The night is hosted by Soulcowboys, a collective of local DJs including Marc Grooves, Echo (a/k/a Chris DeOrio), Matius, Bee Coy, and John Davis that got together to promote good house music nights in the city. Each has a slightly different style, but the music is more soulful, R&B, and jazz-influenced than progressive house music.

And in addition to playing good music, they bring together an eclectic and fun group of people. At this event they've also teamed up with Walt Zink to collect Toys for Tots and donations for the Salvation Army, so bring a gift if you can!

One of my favorite musicians is Stephane Pompougnac, the resident DJ at Hotel Costes in Paris. In fact, Pompougnac gained international fame for his compilation series of house/lounge music cds he mixed under the title of Hotel Costes.

And while I've had the pleasure of visiting the hotel in Paris, tonight I got to see - and meet - Pompougnac on my home turf, as he was the guest DJ at Match Burgers and Martinis on Mass Ave. 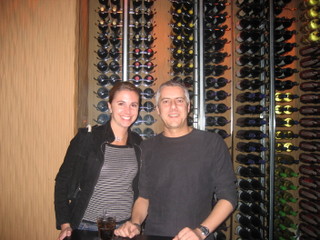 I'm still a bit surprised that Match secured a DJ of Pompougnac's stature, but it was in honor of their first anniversary, and proved to be a great venue to hear and see him perform. I had made a dinner reservation a week ago and got to enjoy the show from a seat in the dining room, while the small bar area was really crowded (and a line of people snaked down the street waiting to get in).

Tune in to Ellen Today!

The 4th season of the Ellen Degeneres show premieres today at 8pm on ABC (channel 5 here in Boston). Be sure to tune in today (and tomorrow!) to see all the excitement I witnessed first-hand when I attended the live taping of the show last Monday in New York. 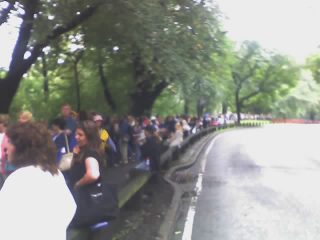 season opener, which was filmed in front of a 10,000 person audience in Central Park. Fans had queued up for hours (literally: I was told the folks near the front had arrived around 6am, some even the night before) in hopes of getting good seats; lucky for me I had a VIP pass which allowed me to go straight to the head of the line when I arrived around 11:30.

Even then, I had to wait for nearly two hours before they let us into the park. I made lots of friends in line, including a young woman and her dad who were visiting NYC for the first time as a family vacation before she headed off to college. They attended the live taping of the Today Show that morning on a lark (Mom & brother missed out because they were not willing to get up that early!), and ended up winning tickets to Ellen's show. Also in line were a newlywed couple who had been married the day before and also won tickets from the Today Show...and the groom was set to leave for Iraq this week.

My seat was in the 6th row, on the right-hand side of the stage, which afforded a fantastic view of Ellen and her guests (and her new DJ, who was positioned on a platform in the middle of the crowd where he kept everyone moving during set changes and commercial breaks). 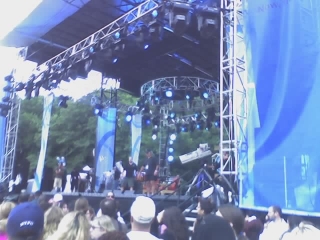 Ellen's first guest was Justin Timberlake, who, together with TImbaland performed the breakout hit from his new CD, Sexyback. The crowd, of course, went wild, and Ellen had a ball dancing with Justin on stage.

After Justin's performance and interview (really, he should stick to singing and dancing) the crew did a quick set change while Ellen switched up her outfit, and we were back in action...this time to shoot episode #2 (which will air tomorrow), with special guest Beyonce.

It was pretty funny because everyone pretended like it was Tuesday (i.e., "We had so much fun here in Central Park yesterday that we decided to come back and do it again today!") when in fact it was still Monday. And, it was Beyonce's 25th birthday, so after her elaborate performance with her 8-piece, all female band, the crowd sang Happy Birthday to her.

It was a super long day (we didn't leave the park til around 7pm) but wow what an event. The entertainment was phenomenal - Ellen especially put on a great show (at one point she ran out onto 96th street to hail a cab, and then dragged the unsuspecting cab driver up on stage and paid him $350 to keep the meter running and just sit and watch the rest of the show!).

Be sure to tune in today and enjoy the show...you won't be disappointed!