I am back from a wonderful, educational, inspirational, eye-opening trip to Cuba and have so many stories to share. But first, the back story:

When investigating vacation options in the Fall of 2013, I had settled on a Smithsonian Journeys tour to Cuba. The island was somewhat shrouded in mystery [to me, having been born after the Cuban Revolution and subject to a US trade embargo for as long as I've been around], but seemed fascinating specifically because of that history. My only frame of reference: History classes from many, many years ago; Desi Arnaz/Ricky Ricardo; the Elian Gonzalez affair of the early 90's; and the TV drama Magic City more recently.

The Smithsonian Journeys trip was particularly appealing to me as it was designed to engage travelers in Smithsonian's mission: "the increase and diffusion of knowledge." Plus, payment for the tour supports Smithsonian's 19 museums (all free to the public), the National Zoo, and its 9 research centers.

But then Lulu's health went into rapid decline, and I had to forgo the trip.

Fast forward one year, and travel to Cuba became a hot topic, thanks to President Obama's efforts to improve relations between our countries. When I tried to book the same January trip I was eying the year before, it was sold out. And the March one was, too. But I put my name on a wait list, and was thrilled to learn that someone else had dropped out. I was going to Cuba!

Despite recent advancements, travel to Cuba is still highly regulated for all U.S. residents, and travelers must qualify for one of 12 designated categories of travel granted by the Treasury Department's Office of Foreign Assets Control. Smithsonian is able to operate under a "people-to-people" license which stipulates that travel requires a full-time schedule of meaningful interaction with Cubans that cannot include free time or recreation.

In addition, individual travelers are required to keep a journal of interactions with Cubans and to provide written accounts of these interactions for up to five years after his/her return to the U.S.

Commercial flights between the US and Cuba are still prohibited; tours such as these are via charter like the World Atlantic flight I took, below. But authorized travelers are now permitted to bring back to the U.S. up to $400 worth of goods (with alcohol and tobacco products limited to $100 of the $400). Under the previous regulations, this was not permitted. There is still no limit on the amount of artwork or informational materials you can purchase and bring back into the U.S. 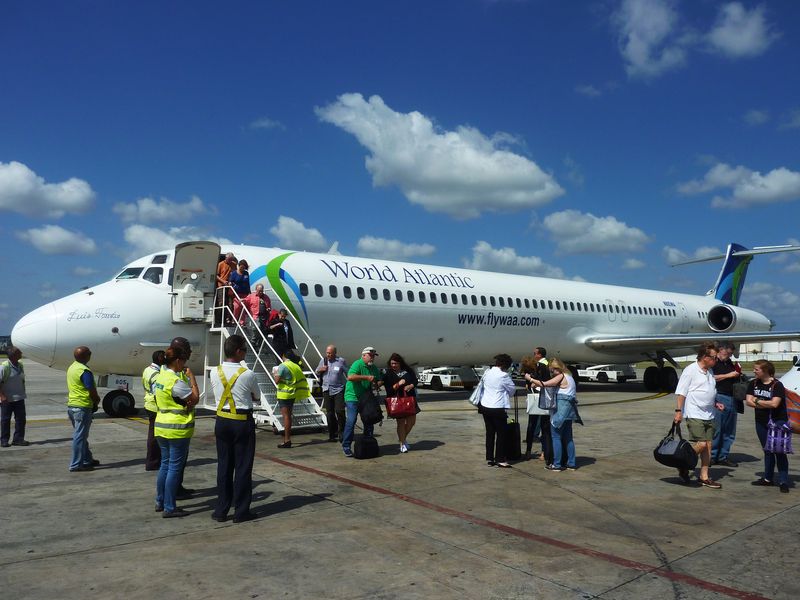 So I embarked on the one-week Discover Cuba: It's People and Culture tour, designed to enhance both countries' mutual understanding and promote educational exchange between our societies. This wasn't about the Cuban government, or its politics, but rather its people. The 11 million living on an island about the size of Pennsylvania, only 90 miles from the U.S. but worlds away culturally.

We traveled to three cities on our trip - Havana, Cienfuegos, and Trinidad - which I'll shed some light on in subsequent posts.

And if you're planning your own trip to Cuba, I highly recommend the DK Eyewitness Travel Guide to Cuba, which is chock full of history, points of interest, street maps and other survival tips for navigating the "Pearl of the Antilles."