You all know how I love a good meal, and a good bit of Boston history, so I was delighted to find a marriage of the two in George Cuddy's book, Where Hash Rules. It's the story of Charlie's Sandwich Shoppe, a landmark in Boston's South End since 1927. 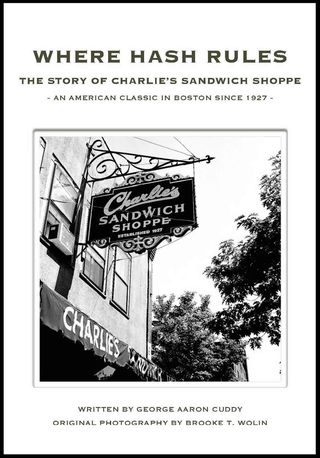 Simultaneously a rich historical account of a city block, and a love letter to the people who made history there, the book is full of personal anecdotes,  newspaper clippings, photos, recipes and blog posts that tell the story of the Manjourides family and their restaurant over the course of 85 years.

In that time, Charlie's has borne witness to a wildly diverse neighborhood that has played host to criminals and celebrities alike. Prostitutes and mobsters, politicians, performers and athletes – everyone from Sammy Davis Jr, Duke Ellington, Joe Lewis and Whitey Bulger, to Tom Brady, Nomar Garciaparra, Robert Urich and Al Gore - have dined at this 32-seat shop. It's cash-only, and offers communal tables, both telling attributes of the no-frills, genial experience you are likely to have there.

In its early days, Charlie's was the only restaurant in town that would serve African Americans. The Pullman Porters  -  men hired by George Pullman to work on the railroads as porters on sleeping cars  - established their Boston headquarters above the restaurant and admitted original owner Charlie Poulos as the only non-black member so he could play cards and shoot pool with them.

In the years since, all sorts of characters have crossed the threshold, including Cookie the bookie, Chapman the peeper, Richard the storyteller, and Biggie the bulldog. They've all contributed to Charlie's vibrant history.

But central to the story are the four beloved proprietors and siblings, Arthur, Marie, Fontaine, and Chris, who have been slinging hash – and stories – for decades.  Their immigrant father Christi was Charlie Poulos' first employee, starting out as a line cook and then through some shrewd business dealings becoming a partner in 1946.  This family's story, their hard work and dedication to the business as well as their community, has all the tenets of the American Dream.

Though I’ve yet to visit Charlie’s in person (despite living here for nearly 20 years…the shame!), I feel like I know them all. And like the author, I feel slighted that I missed out on so many of the memories.

And what of the food? Charlie's consistently gets rave reviews for its great meals at great prices, and it won the prestigious James Beard Award in 2005. I am dying to try the cranberry pancakes and the raspberry griddle cakes. And of course, the famous turkey hash.

You can purchase Where Hash Rules (ebook) at Amazon or Barnes & Noble, read more about it on Boston.com and Bon Appetit, and stay up-to-date with restaurant happenings via their Facebook page.

And perhaps I'll see you at one of their communal tables one day soon.