Beam me up, Scotty

I am finally on my last leg of breast cancer treatment, which consists of 28 radiation sessions administered every day (M-F) for six weeks. I leave work around lunchtime, drive over to MGH, spend about 20 minutes actually getting treatment, and some days have additional meetings with various doctors and nurses. Between the commute there and back, parking, and all the appointments, it's generally 2-3 hours out of my day. Every weekday.

But the exciting part of it is that I'm taking part in a research study on a new kind of radiation  - proton therapy, vs. the more traditional photon therapy. Doctors have used traditional photon therapy via a linear accelerator since the 1950's. While these high-impact x-rays work well to kill cancer cells, they are indescriminate and destroy a lot of the healthy surrounding cells as well. In fact, traditional radiation therapy can lead to heart, lung, bladder, and bowel problems (depending on the area of radiation) and sometimes even a new cancer in the body.

In contrast, proton therapy, which uses a cyclotron to produce high energy protons, can be precisely targeted at the diseased tissue only; it has an entering dose of radiation but no exit dose, so it doesn't harm nearby healthy cells.  As you can imagine, this is a huge advancement in treating cancers that live near major organs, such as head & neck cancers where traditional radiation might harm critical brain tissue.

Proton therapy has been around for 5 or 6 years now, but the high cost of building a system has limited its use. Today, there are only 7 of these machines in the country, and they have historically been reserved for pediatric patients (in an effort to minimize long-term radiation effects on their young bodies) and head/neck and prostate cases. But in this pilot program at the Francis H. Burr Proton Therapy Center at MGH a team is studying usage of proton therapy on left-side-mastectomy-with-reconstruction patients like me - 26 of us, actually. Where traditional radiation would be difficult for us due to the proximity of the heart and lung, the proton beam can be controlled in a way that they zap the tumor area but not nearby organs and healthy tissue.

The science behind it is remarkable, as depicted in these great illustrations from the University of Florida and the New York Times. This is pretty similar to the set up at MGH (I think ours is a bit bigger, with a 4-story Gantry vs the 3-story one depicted here), and it will give you an idea of scale. Note the tiny read figure in the image that represents the patient in the treatment area. As in this picture, MGH has one cyclotron (which is off limits to patients - too radioactive!) which creates a proton beam that is then fed alternatively into one of three treatment rooms that sit in front of the gigantic Gantry: 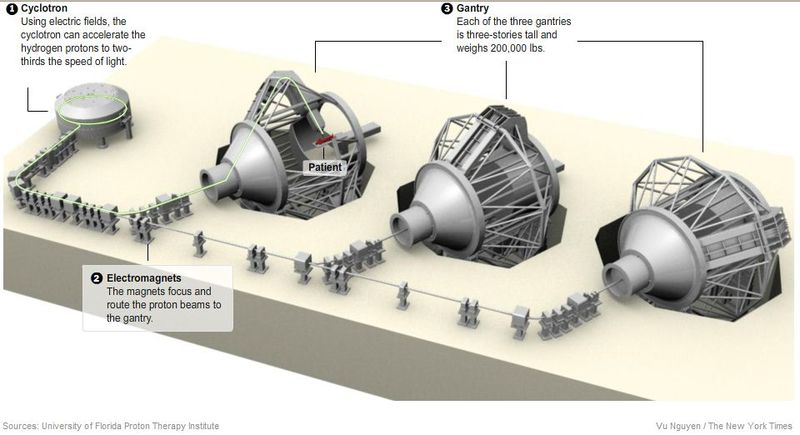 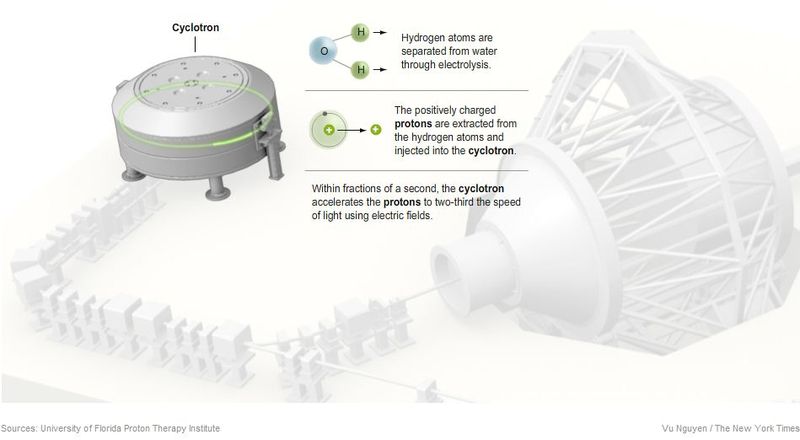 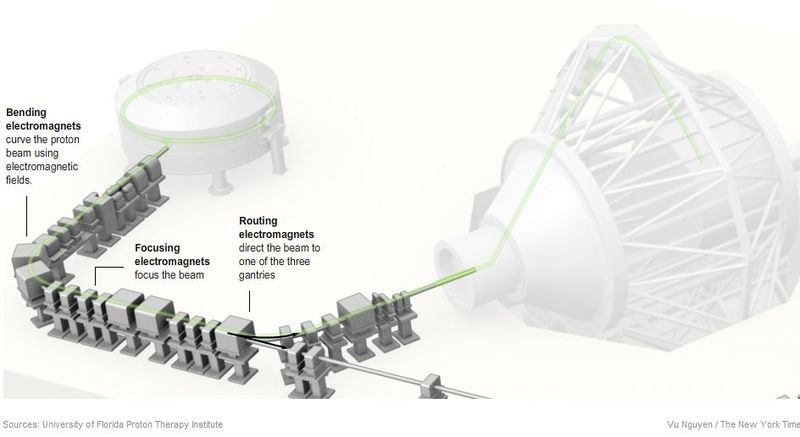 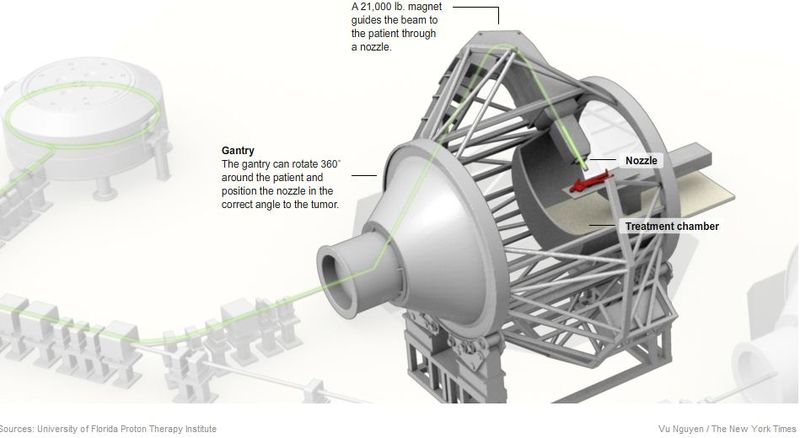 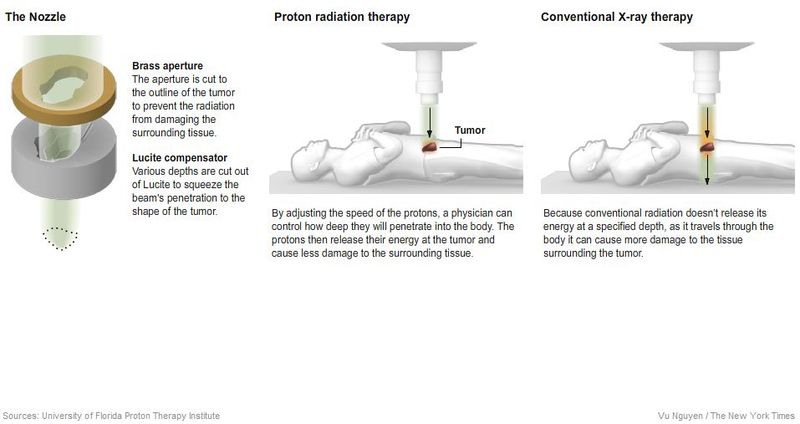 Here's a picture I took of my treatment room, Gantry 2. What you can't see is the window on the left that looks out onto the 4-story Gantry sitting behind and around this room, which can rotate 360 degrees around me to position the nozzle perfectly over my tumor area. 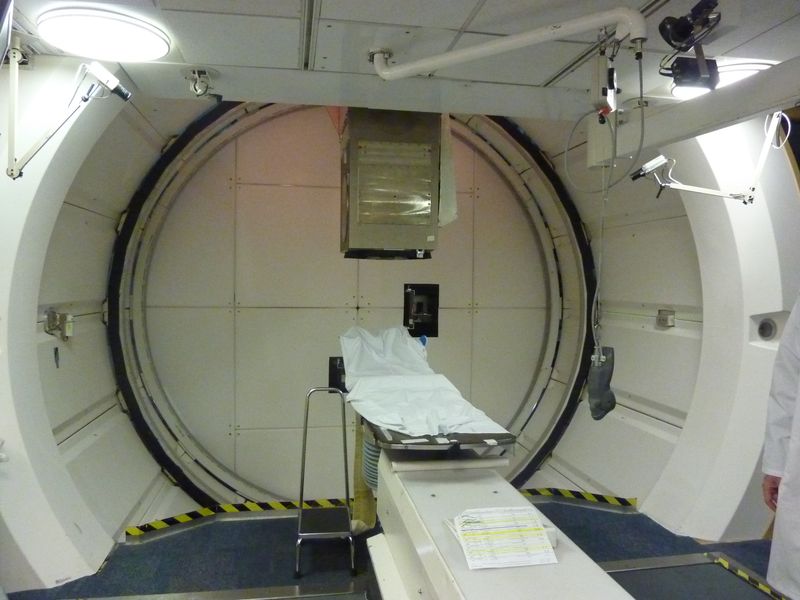 And you can't see the nozzle that is lowered down over me to focus the beam on my chest. It is so heavy that they use a crane to put it in place, and they schedule patients who use the same nozzle size back-to-back, so that they can minimize how many times they need to change it in a day.

There are two pieces that sit on the nozzle that are personalized to each patient: a brass aperture that is cut in the shape of their tumor, and a lucite compensator that controls the speed at which the beam enters the body. You see, protons lose energy at an increasing rate as they slow down, so by changing the protons' energy, doctors can get them to stop at any depth they choose.  They create this compensator using a 3D picture of the patients' anatomy and tumor (from CT or MRI scans) and shape the radiated area to fit the tumor, using advanced treatment-planning software. When the proton beam is directed through the nozzle, it is compressed into the shape of that individual's treatment area, and is slowed as directed by the lucite compensator (which means the radiation does not go beyond the cancerous tissue). Here are the brass apertures and lucite compensator that were created for me (I have two treatment areas - the breast and lymph nodes): 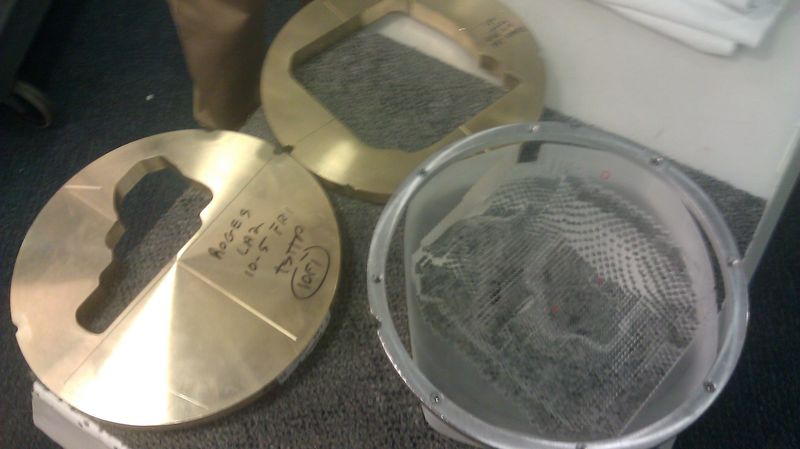 It's all really fascinating, which makes it a bit easier to go through. And the 4-5 new members of my care team who work in the Proton lab are fantastic. I look forward to seeing them again tomorrow!

Thanks for reading! I'm glad you found it as interesting as I do. I had the opportunity to hear one of the directors of the proton lab speak about the technology after I wrote this post. He shared more remarkable details of the system, including the fact that NASA and various tech companies use this lab to test the effects of radiation and solar flares on machinery that is intended for outer space. And the father of proton therapy is a nuclear physicist named Robert R Wilson who worked on the Manhattan Project, felt badly about it, and went on to find a way to use nuclear physics for good. Fascinating stuff.

Thanks so much for writing this up. Wow it was fascinating. I got it via fb last week but then was 6 days away with students with no wifi so no time to read it until now. Really interesting and also inspiring to think what this will do! You are definitely in my thoughts and it is great news that you are in the home stretch.