Made in the USA

It's been 6 weeks since my surgery, and I'm finally feeling back to "normal" (albeit a new normal, where fatigue and random joint pain are routine occurences thanks to my old friends AC-Taxol).

But I've regained range of motion on my left side, am building up my chest muscles again (and have new-found respect for them: you don't realize how much you use them until it hurts to do so! Basically, every time you sit, stand, bend down, reach, sneeze, cough, or otherwise move your upper body), and feeling pretty good about my new - ahem - anatomy.

Blogging about breast cancer has always been an exercise in navigating that fine line between information and too much information (TMI). But the science behind it is quite fascinating, and now that I've gone through a mastectomy and reconstruction I find many people are curious to understand what exactly that means. So here goes: this post is about breast implants. If you think that's TMI, then turn back now!

Mastectomy is removal of the breast tissue as a way to treat breast cancer (and in some cases, people who are at high risk for the disease elect to have the operation prophylactically as a way to prevent it). There are different kinds of mastectomy, and different options for reconstruction of the breast(s). There is also the option to skip reconstruction altogether, and many women go that route. Suffice to say, the decision is a very personal one and I won't debate the pros & cons of either path here. But I will tell you that I had a unilateral mastectomy with single-stage reconstruction (so, removal of the breast tissue on the left side and insertion of a silicone implant, all in one surgery).

Now, most women who undergo reconstruction have a two-phased approach. First, they get tissue expanders, which are spherical, saline-filled implants that have a disc in the middle (at top in the image below). Once it's implanted, you go in weekly and the doctor inserts a needle directly into that disc (right through your skin) to fill it with more saline, slowly enlarging it and expanding the surrounding skin (tissue) over time. The second stage occurs 4+ months later, when the tissue expander is removed and replaced with a silicone implant (at bottom in image below), which you then have for the duration. This two-step process can take about 6 months, however, so it wasn't an option for me (because it would have delayed me getting into radiation for that long). And I'm glad, because I don't think I could've handled the saline needles! 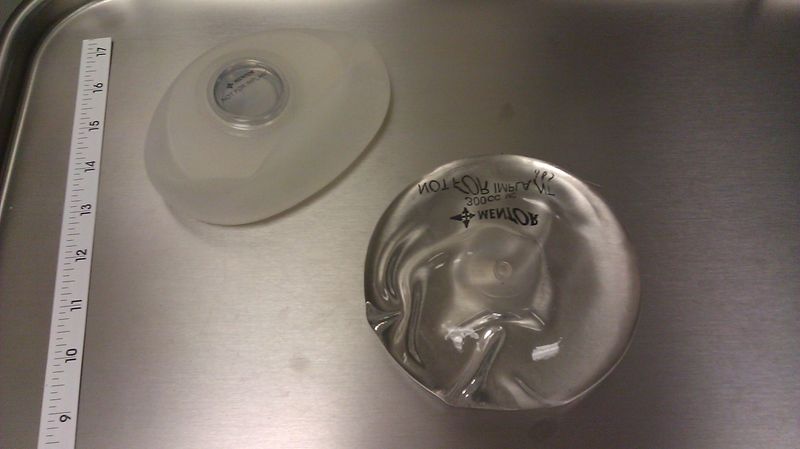 So I had the mastectomy and silicone implant procedure all done at once, which took about four hours in surgery. I had a subcutaneous mastectomy, which means that the surgeons preserved all of my skin, making an incision below the breast, removing all of the breast tissue, inserting the implant, and then sewing me back up. I'll say again how fortunate I am to receive care at MGH, as both of these procedures - subcutaneous mastectomy and immediate reconstruction - are not standard operating procedure at other hospitals. I was very lucky to again receive the "latest and greatest" treatment protocol, and everything went smoothly.

Two things I learned that I found interesting:

(1) In the early days of implants, doctors would tack them down in about 4 spots to keep them in place. But they found that they were more likely to tear around the stitches, so they stopped doing that in favor of letting them move around freely between the skin and chest muscles (!)

(2) It is for this reason that the implants are spherical (vs. say, tear-drop shape to better mimic real breast tissue by being flatter at the top and fuller at the bottom), so that they can move around and always look the same. If they were tear-drop shaped (or other) they would look funny if they flipped upside down!

So this year I will not only recognize Breast Cancer Awareness month, but also the inaugural Breast Reconstruction Awareness day (affectionately called BRA) on October 17th. Haven't heard of it yet? You will: the American Society of Plastic Surgeons is launching a campaign to raise awareness of the historically taboo subject, because even today about 7 in 10 women are not fully informed of their reconstruction options.  They've tapped singer/songwriter Jewel as the spokesperson, and she has penned an inspirational song to raise funds for reconstruction-related research and the charitable care of breast reconstruction patients.

And what of this post's title? I lifted it from a sign in my doctor's office that made me chuckle: 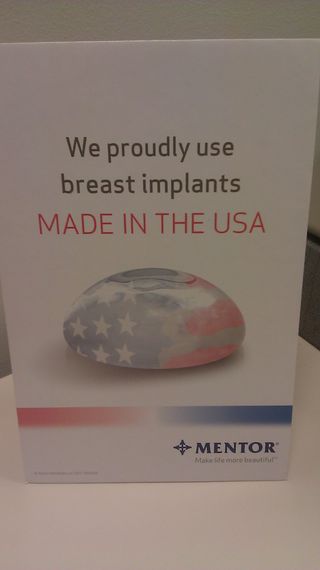