"You never know how strong you are until being strong is the only option you have."

My friend Catherine sent me that quote back in February. I don't know who originally said it (it appears to be a popular one on the Web), but it holds particular significance for me now, seven months after my initial diagnosis.

I never thought I could endure the harshness of chemotherapy with all of its absurd side effects, or the subsequent needle localization procedure and not one but two lumpectomies. I nearly fainted the first time I had a surgical drain placed in my side, and I was overcome with anxiety last Sunday night as I counted down to the dreaded mastectomy I'd been dodging all year.

But guess what: I made it through and it wasn't as terrible as I'd imagined.

I mean, it was incredibly difficult to have to go through something like that, and I'm of course dealing with some pain (plus a gag-inducing two surgical drains), but I'm back home, moving around, and for the most part feeling ok.

It was another 5:30am start time at MGH on Monday, where I was the first procedure of the day for my surgical team. I was all worked up about getting the paravertebral nerve block (where they inject novacaine into the nerves near your spine that control feeling in your chest) because although it is designed to reduce post-op pain & nausea, you're awake when they do it. Thankfully, I had taken some Ativan that morning to calm my nerves and they had already begun to administer the anesthesia drip so the last thing I remember is them saying, "OK, roll over onto your belly..." and that was it. No recollection of the nerve block, the subsequent 3.5 hour procedure, or my time in the recovery room. In fact, I only vaguely remember seeing my parents later that afternoon, and was still pretty out of it when my friend Sara visited that night.

So, I made it through with relative ease. The surgeons were able to remove the cancerous breast tissue, salvage my skin, and do the reconstruction in one fell swoop. I won't get the full pathology report back until next week, but all of the doctors are pleased with how things went from a surgical standpoint (and although I still have trouble looking at my reconstructed self, they tell me it looks great. Sorry, Justin, but I didn't go Coco style).

I spent two nights in the hospital, which in some respects was more difficult than the surgery itself: I had an elderly roommate that needed lots of care, which meant a constant flow of traffic through our room at all hours of the day and night (and the nurses have no qualms about throwing on those harsh overhead lights and talking at full volume when you're trying to sleep two feet away!). And then I had my fair share of 11pm antibiotic infusions and 6am rounds.

Thankfully, I had lots of visitors to help pass the time, and they brought an assortment of snacks and magazines and flowers to cheer me (thank you!!!), and I had a fantastic day nurse - Rich - who surprised me with the best invention ever: the Jacki shirt. Designed by a breast cancer patient and tested at Boston's Brigham & Women's Breast Health Center and Tufts Medical Center, it's a post-surgical garment paid for by sponsors and distributed free of charge to breast cancer patients. Unlike a traditional hospital Johnny, which is thin, coarse, and leaves your backside exposed, the Jacki is a soft cotton jersey with Velcro closures for ease of dressing (when you have limited motion) and physical exams. But the best part is that it has several interior pockets to hold the nasty surgical drains! I opted for the incognito All Star shirt, and I'm sure people have no idea I'm recovering from surgery...they probably just think I'm an old-time baseball player.

So now I'm home with my antibiotics and pain meds. I'll go in again next week for a check-up and hopefully get one of the two drains removed, but it will be about 4 weeks until I am healed and can go on to the next (and final!) round of treatment: radiation. But I'm not even worried about that at this point. It really is amazing how strong you can be when necessary.

For now I'm just concentrating on getting my throwing arm back...for Lulu's sake. 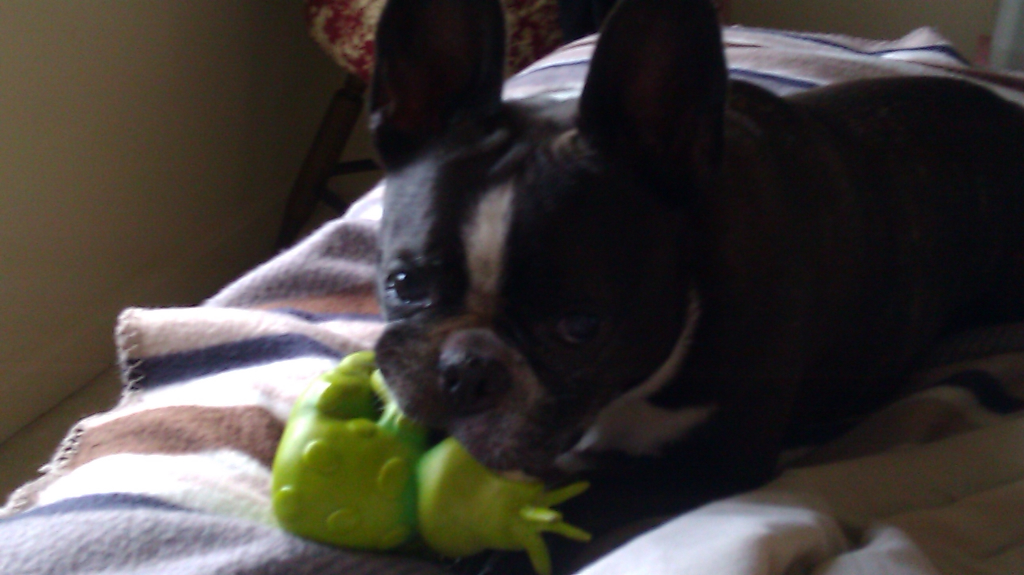 Stephanie I am so relieved to know this surgery is finally behind you! You are going to be back to yourself in no time. I am praying for a speedy recovery and brighter days along with lots of hugs!!! xoxoxoxox~Karen

I am so glad to hear that the surgery went so smoothly and if I may, this post seems to have a kind of "victorious" tone to it.

You certainly should feel victorious. You've been through a lot, evidently found a deeper level of strength, and STILL managed to make a fashion statement!

How is that possible?? lol

Wishing you congratulations and a speedy triumph over your final round of radiation.