Finally some good news from the health front: the chemo worked!

Back in January, the tumor in my breast measured 4.6cm and was too large to surgically remove and obtain clear margins. So I was prescribed a 4-month course of chemotherapy designed to shrink it to a more manageable size, and I'm happy to report that the lastest MRI shows that it is indeed much smaller - now less than 2cm!

I had the MRI on Wednesday and actually went home with copies of all my images on a CD. I debated whether I should look at them or not - the technicians at the imaging center don't share any information or results with you, and I wasn't scheduled to get the final readout from my surgeon until Friday - but curiosity got the best of me and I did. At first I didn't know what I was looking at, but after a little Googling ("How to read a breast MRI") I felt pretty confident that the outlook was good. And it was confirmed yesterday when my surgeon informed me that she was thrilled with the outcome (and that I'd been spot on with my interpretation of the MRI).

Yesterday I was also able to get my hands on the images from January, and it's really clear when you compare the before and after. Here they are in all their glory - cropped so as not to reveal too much of my anatomy :) The brighter white areas are the cancerous cells (which glow in the MRI thanks to the contrast dye injected into my system beforehand); the black circle is a metal clip that was placed as a marker of the tumor location. You can see how much smaller the white area is on the image on the right: 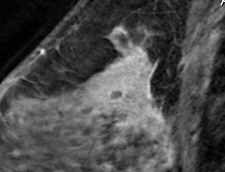 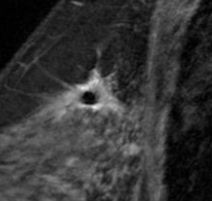 So things are looking good. And how's this for a sign: my friend Ana had given me a Wish bracelet back in February, which I dutifally tied around my left wrist (the surgery side). Now, you cannot have jewelry of any kind on when you go into surgery, and I was wary of having to cut the bracelet off (superstitious that it would result in bad luck!). Wouldn't you know - the bracelet fell off on its own yesterday, which I discovered while out for a celebratory dinner with my girlfriends, Ana included. I guess my (short-term) wish came true!

While all of this is this is great news, I'm not done yet. I am scheduled to proceed with a needle localization, lumpectomy and lymph node dissection next Wednesday, so keep the prayers and positive vibes coming to help me get through this next hurdle.

I'm anxious about the procedures (the needle part in particular) but feel really good about the plan - chemo plus lumpectomy and radiation (which I'll have for about a month after I recover from surgery) has been shown to yield the same long-term outcomes as a mastectomy, while preserving the breast and having minimal scarring.

Finally in the home stretch!

Stephanie,
You have so much strength and courage, and your positive outlook is what will get you through this. I am so impressed with how you have handled your journey thus far, you are such a inspiration for others whom are suffering with breast cancer.

Thinking of you and hope all goes well tomorrow.

Yay Steph!!!!
That is amazing news. you are one tough cookie!!! you are in my thoughts and prayers constantly. hope to see your pretty face soon.
love ya,
jeremy (and ethan, mags and sades)

That is SUCH good news! What a difference...