Home Subscribe Archives Social Circles About
Lucky No. 7
D-Day and the Ghost Army

Today I received my last chemotherapy infusion. It was sort of anticlimactic - no spontaneous singing (like Cracker Barrel on your birthday), or confetti falling from the ceiling. But it was a big milestone in my treatment: Phase I is now complete.

It was a long 4 months and while I'll miss seeing the smiling faces of my care team, I am soooo happy to have that phase behind me. And I chatted with a fellow patient today who provided a sobering reminder of how lucky I am to see the light at the end of the tunnel. He is battling multiple myeloma, a terminal case of cancer of the bone marrow. I've been spending 7 or 8 hours at the hospital per treatment knowing that it would end on this day, whereas this poor man spends 12 hours per visit in the latest clinical trial, hoping to get some short term relief.

I still have some occasional bone pain, random ankle swelling, night sweats, cording, and a fair amount of fatigue, but for the most part I feel much stronger than I did at the beginning. I can't say the same for my hair, brows, and lashes - they have finally given up the fight. Here's what they looked like back in February:

But the good news is that I should start seeing some new growth on my head in about a month. Word is, it'll be peach fuzz, possibly light or gray because chemo kills the pigment, and maybe even curly. But it'll revert back to my straight, brown locks at some point.

And in the meantime I've poured my cosmetic energy into my nails and did this fun sponge application which I first spotted on Pinterest: 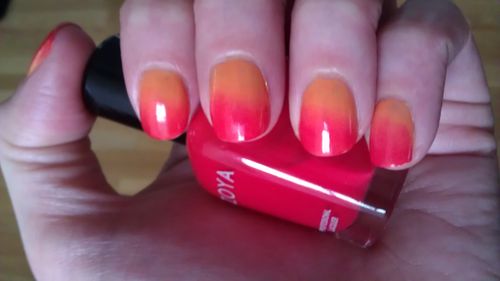 So next up is Phase II: surgery. I go for my breast MRI next Wednesday, followed by a surgical consult on Friday, and surgery on June 13th. I'm currently reading Prepare for Surgery, Heal Faster, as recommended by the social worker at MGH, in hopes that some of the mind-body techniques it teaches will help me get through it without stress.

But for now we'll just celebrate the fact that I made it through chemo!

Thanks, Stephanie - btw, I know this woman, Camille Kittrell, who has been practicing and teaching yoga to breast cancer surgery survivors for years, with remarkable results: http://www.exclusiveyoga.com/YogaForRecovery.html

Her approach increases mobility that is often constrained by scar tissue resulting from the surgery. A lot of the area hospitals use her [Brighams, MGH, etc] for onsite classes, but I think she's still available for one-on-one sessions. Evidently, many dont think about mobility issues after surgery, but its common, and she may be helpful.

I must say that I was struck by the side by side images. My mind immediately went to the standard before-and-after format we all know so well. But, then I realized something much more powerful: the image on the right? That's the BEFORE photo.

And the AFTER photo? That's the one that'll be taken when you're triumphantly recovered from surgery.

My thoughts and prayers remain with you.

Thank you, Karen, that is so sweet. Truth be told, it's tough staying positive all the time, but I know how important it is to healing, and all the support from friends and family really helps. So thank you for always checking in on me!

Stephanie, You amaze me with your strength and positive attitude! You are so beautiful and such an inspiration! Love and Hugs~~Karen