Home Subscribe Archives Social Circles About
Going Public
What about my hair?

Today's post is a science lesson, courtesy of Genetic Counselor Michele, with whom I met this afternoon.

I had heard of this genetic test and mentions of "the cancer gene" before, but really didn't understand it all until I got my own diagnosis (which was one month ago today,  incidentally). I always assumed they tested you to see if you had "the gene" - a genetic marker that you're predisposed to breast cancer. But that's not exactly the case.

You see, we all have "the gene." It's actually two genes, BRCA1 and BRCA2, that work in concert to repair damaged DNA (apparently strands break all the time and a group of "caretaker genes" of which the BRCAs are a part work to repair them) and prevent tumors (abnormal cells) from growing in your body. We all get two pairs of them - one from our mother and one from our father.

The problem is when one of these genes is faulty - or mutated - in which case it doesn't do its job properly and abnormal cells multiply unchecked. Cancer (the uncontrolled growth of abnormal cells in the body) ensues.

About 90% of breast cancer cases are spontaneous, meaning doctors can't figure out what caused the cancer. Crazy.

About 5%-10% are hereditary (and I guess the balance must be tied to a known environmental factor) and there is a genetic test that can be done to determine if that's the case. It is wildly expensive and is only done by one lab, called Myriad Genetics who cloned the gene back in 1994 (Dad: NASDAQ MYGN ... get on it!).

The test was controversial in the past (insurers using it as evidence of a pre-existing condition and an excuse to drop coverage), but it is now illegal for insurers or employers to discriminate based on this information. It's a simple blood test, with results turned around in 2-3 weeks.

A positive result doesn't necessarily mean you'll get breast cancer, it just means you have a higher likelihood of getting it than the average woman. A woman without the mutant gene has a 10%-12% chance of developing breast cancer in her lifetime, whereas a woman with it has a 50%-85% chance of developing it. Plus a 40%-60% chance of developing a second cancer at some point thereafter. Eek. That is why so many women who test positive for the gene - even those with no evidence of cancer - opt for preemptive measures like a double mastectomy. And it is why they recommend that people like me, who already have it, go ahead and get the test so that we have as much information as possible when it comes time to make the surgery and long-term treatment decisions. There is also a high correlation between breast and ovarian cancers, so if you test positive for the gene they do much more rigorous testing for the latter (which is MUCH harder to detect...there is no mammogram equivalent for ovarian cancer). Oh - and first-degree relatives of those with gene mutations have a 50 percent risk of carrying the same mutation. 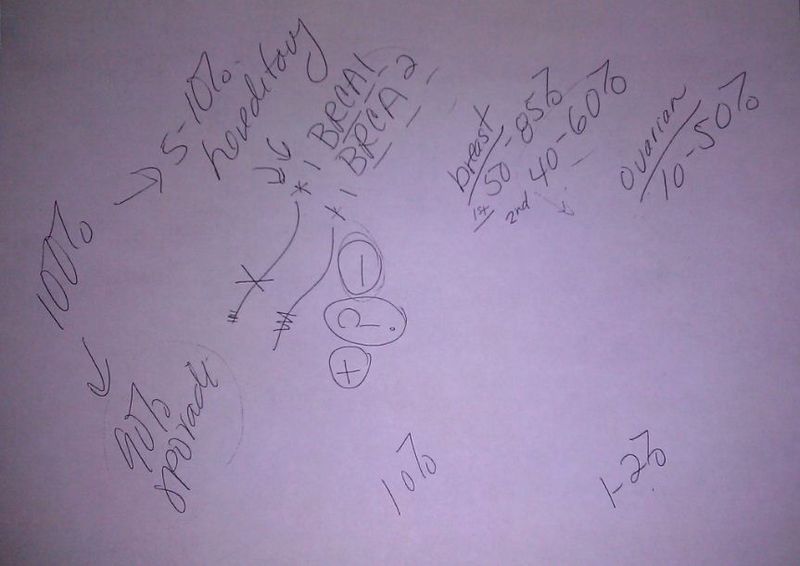 So, Michele and I mapped out my family [cancer] tree (they should add that module to Ancestry.com) as a starting point. They actually don't think I'm a candidate for the mutation because there is no history of multiple cases of  early onset breast cancer in my family (yes, my Mom's a survivor, but she got it very late in life, as did her mother and they are the only two known cases) and I am not of Ashkenazi (Eastern European) Jewish descent (which apparently has a higher incidence). But they also told me that my initial scans indicated the cancer hadn't spread...and it had...so who knows. I'm learning that there are never really any definites with these things; the doctors do the best they can with the information they have available, but sometimes that isn't enough.

I guess that's where faith comes in :)