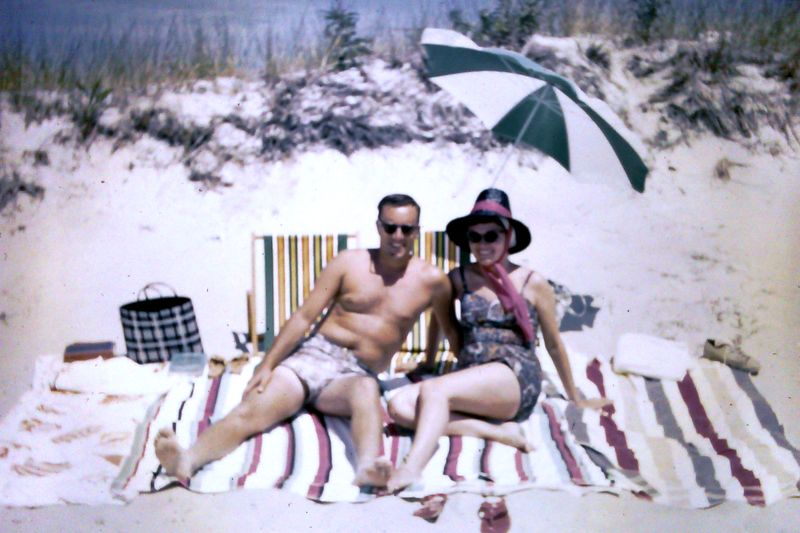 That's my parents, circa 1962. I think they were vacationing in Plymouth, MA, judging from the other pictures in the series (of Plymouth Rock and the Mayflower). But that's not important to this post. Here's what is: 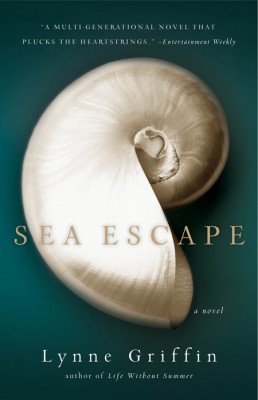 So, you can imagine my surprise when I started reading Lynne Griffin's novel, Sea Escape, which tells the story of a young couple named Helen and Joseph, who meet and marry in the 1950s, and listen to Tommy Dorsey while dancing at the Totem Pole!

But it wasn't completely random that I picked up this book. You see, a couple of months ago I attended a friend's book reading at Newtonville Books, where Lynne also made an appearnce and shared the real-world events that inspired her story. When her mother died some years ago, she found a large box full of letters that her father had written. Not sure of what they might entail (and not wanting to unwittingly stumble upon any dark family secrets), she and her sister agreed to read through them only until they came to something that they knew their parents wouldn't have wanted them to see. And if that happened, they would put the letters away for good.

But to her delight, the box was full of nothing but beautifully written love letters from her father to her mother. The sentiment of those letters, plus knowledge that her parents had always dreamed of retiring to a home by the sea (which, sadly, they never did), helped shape the story that became Sea Escape. And while it's a fictional piece and the characters and events are not meant to depict Lynne's own family history, she did use some of her father's letters in the book, and of course fulfilled her parents' dream to have their very own sea escape.

I was captivated by this story and set out to read the book, not knowing that I would encounter the similarities to my own parents. But thankfully the parallels ended there, as the fictional Helen & Joseph go on to endure more tragic events and consequences, while their estranged, adult children struggle to deal with a few family secrets and an uncertain future. Sea Escape is primarily a story about mother-daughter relations, and the need for love and acceptance no matter your age. It follows present-day Helen and her grown daughter Laura, but also relays Helen's courtship with and early marriage to Joseph through a series of flashbacks. At times the multiple characters and back-and-forth time periods made it difficult to follow, but it sure was fun to witness the [perceived] innocence of a 1950s love affair through those letters.

Hunting for Treasure in Brimfield 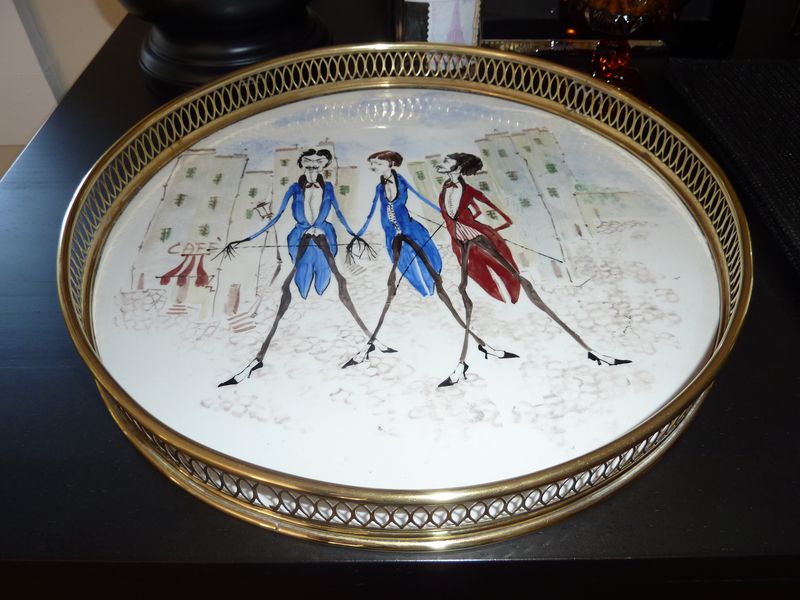 It's another beautiful Fall day in Boston, and before I head out to the South Boston Street Festival I wanted to give a quick update on last week's pilgrimage to the Brimfield Antique Show.

This is the largest outdoor antique show in the world, with over 6,000 dealers and 130,000 visitors spread out across 24 fields in western Massachusetts. The show is only held 3 times a year - generally for 6 days at a time around Memorial Day, July 4th, and Labor Day. I absolutelyl love going (here's the post from last year's trip) and browing through the one-mile stretch of jewelry, art, furniture, textiles, housewares and every kind of collectible you could imagine.

My big score this year was a hand painted ceramic and brass tray from Italian artist Arnaldo Miniati (above). I also had my eye on a beautiful set of Staffordshire Dogs, but decided to pass on them and now, of course, regret it. Even more so because I had taken a photo of a table full of them, but for some reason half of the photos I took that day mysteriously disappeared from my camera.

But I was able to retrieve a handful of other shots, among which you'll see the devastating effects of the tornado that tore through Brimfield back in June. It was eerie to be driving along route 20 among lush trees, and then all of a sudden get to a spot where the trees are flattened on both sides. 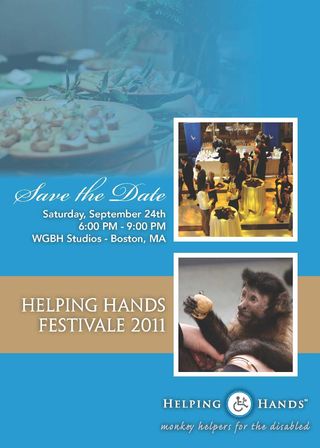 The fall fundraiser for Helping Hands: Monkey Helpers for the Disabled is right around the corner. Have you purchased your tickets yet?

It's going to be another fun night, with food from some of Boston's top restaurants (Mistral, Sorellina, Teatro, L’Andana, Mooo, Eastern Standard, Basho, Cafeteria, Masa, Konditor Meister, Davio’s, The Beehive, Gaslight, Woodward, Rialto and Zocalo), beverages from Grey Goose and Harpoon), flowers by Winston's, and music from Blues Brothers the Next Generation.

And this year, we've added a new feature for those who can't make it to the event: an online auction! So if you can't make it to Boston on 9/24 but still want to support the Monkey College, you can do so by bidding on the various art, books, collectibles, wine, travel packages, entertainment and sports tickets we have available.

For over 31 years, Helping Hands has trained and placed service monkeys free of charge to assist individuals living with physical mobility limitations. Monkeys assist recipients in the home environment, retrieving dropped items, pushing buttons, opening bottles, and repositioning an arm or leg in a wheelchair after muscle spasm.

Helping Hands provides each monkey-recipient pair 24/7 staff support for the lifetime of the placement, and all funds come from foundations grants, private donations, and fundraising events like Festivale.  Ninety-three cents of every dollar raised directly supports Helping Hands program services.

Please consider joining us by buying tickets, making a donation, or placing a bid. 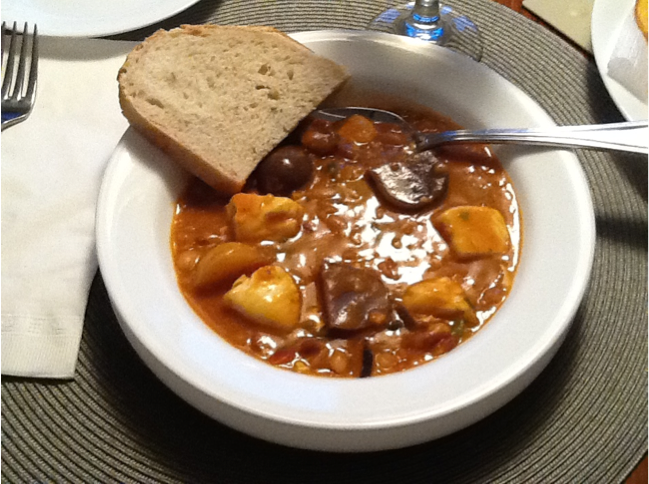 This rather humble meal was a big hit at my house this weekend. Perhaps I was inspired by my recent trip to the fishing town of Essex, or my discovery of white port, or even a friend's Facebook photos from Portugal, but I opted for a hearty fisherman's stew and it didn't disappoint. In fact, my Dad said it reminded him of the Portuguese soup his grandmother used to make!

For appetizers, I served an apertif with cheese & crackers:

For the main course, fish stew with fresh rosemary boule and white wine:

The whole thing was so easy and so delicious, we'll surely do it again. 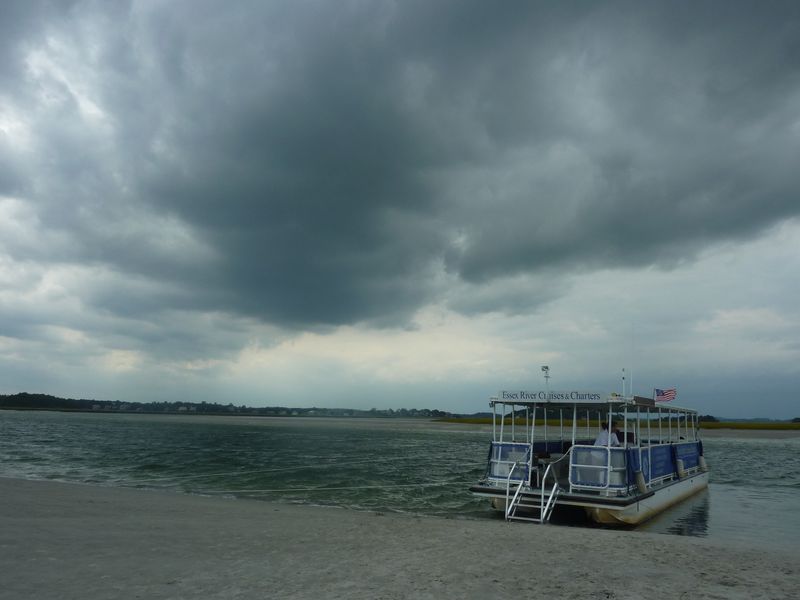 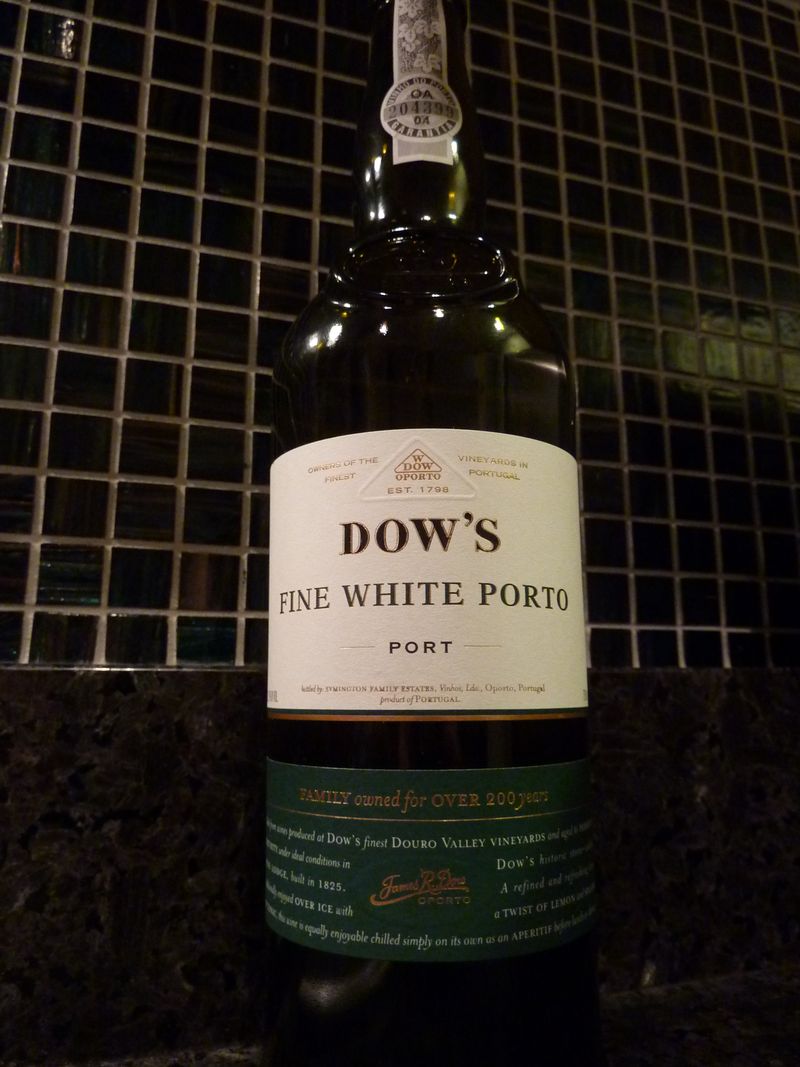