Leave it to Urban Daddy to introduce the latest twist on dining in Boston: a semi-secret, Hemingway-themed dinner party...in Southie. 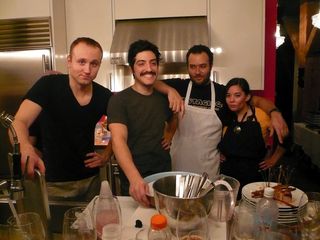 Hills Like White Elephants, named after a Hemingway short story, is a supper club that will debut in Boston on June 13th after enjoying previous nights in London, New York, and Panama City. It is hosted by Michael Cirino and friends from a razor, a shiny knife, an "educational, social, and theatrical culinary experience."

Ticket holders are promised a night of intrigue: besides dining with strangers in a room done up like the Hemingway short and access to 7 courses of exotic fare, they'll be treated to "demonstrations of skill" like knife-sharpening or sausage making.