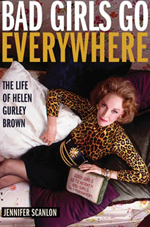 Before Mary Richards and Ann Marie (of That Girl fame), before Gloria Steinem and Candace Bushnell, there was a different sort of champion for the single girl: Helen Gurley Brown.

You may know her as the long-time editor of Cosmopolitan magazine, but as Jennifer Scanlon recounts in her very entertaining biography of HGB, Bad Girls Go Everywhere, she's also a prolific writer, media maven, and feminist (of sorts) that was way ahead of her time.

I picked up Scanlon's book after reading about it in my college alumni newsletter (Scanlon is Professor of Gender and Women's Studies at Bowdoin College), thinking it would be a fun, "Summer" read. What surprised me was that it was much more academic in nature - providing fascinating insights into both gender roles, the media landscape, and pop culture in the 1960s - but still eminently readable, like one of Carrie Bradshaw's columns.

What I found so interesting:

Although HGB no longer mans the helm at Cosmo, she was named the 13th most powerful American over the age of 80 by Slate magazine. Her beloved David died earlier this year at age 93, but Helen is still going strong at 88.