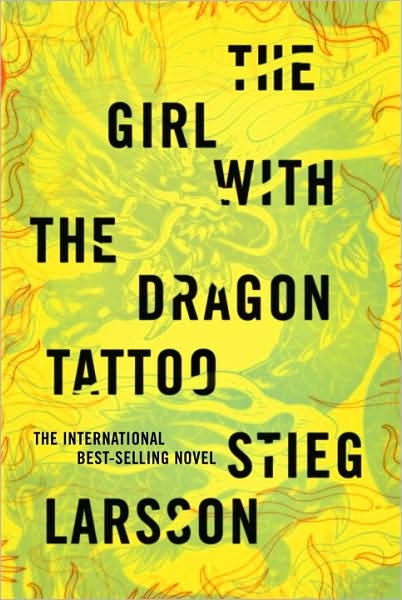 By now you've probably heard of Stieg Larsson's best-selling novel, The Girl With The Dragon Tattoo. It's a fast-paced thriller set in Sweden, the first in a trilogy of books featuring Lisbeth Sanders, a quirky investigator/computer hacker and the "Girl" in the title. In this particular story, she teams up with Mikhail Blomkvist, a once-respected journalist who has fallen on hard times, to investigate the mysterious disappearance of a young girl forty years ago.

I took this book with me on vacation - the perfect time to sink into a good story, especially one with as many characters and story lines as this one. There's a lot going on in this book, but it's a riveting tale and I could hardly put it down (that is, until the last couple of chapters; the real surprise ending happens in advance of the actual book ending...my only complaint). Regardless, I look forward to seeing the movie version and digging into the next book in the series, The Girl Who Played With Fire. I was saddened to hear that Larsson died in 2004, and that these three books in his Millenium series were his last.

But I was pleasantly surprised to receive an email from my friends at Simon & Schuster recently that read, "If you love Steig Larsson's Mikael Blomkvist you will certainly fall in love with Malla Nunn's enigmatic Emmanuel Cooper." They were referring to the main character in Nunn's second novel, Let the Dead Lie, and I was sold. I requested an advance review copy and devoured it. 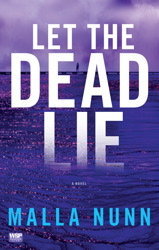 This book is actually a sequel to Nunn's debut novel, A Beautiful Place to Die (now also on my reading list). Both stories feature Emmanuel Cooper, a former soldier and police detective sergeant who is indeed as crafty and tough as Larsson's Blomkvist. And like Blomkvist, the actions of his past haunt his present.

Let the Dead Lie is set in 1950s South Africa, specifically, in the port town of Durban - a melting pot of Indians, Afrikaners, Zulus, English, Russians, Jews, and Greeks - that at this point in history is still subject to the racial separation system of apartheid. The area of focus is the Victory Shipyards, which turn into a hotbed of violence, prostitution, and thievery at night.

Cooper is now working undercover on the docks of Durban Harbor to document police corruption, when he stumbles upon the slain body of an 11-year-old English slum kid that ran errands in the shipyard. Cooper, who grew up in a mixed-race family in the slums of Johannesburg, identifies with the boy. Rather than "letting the dead lie," he gets entangled in the crime scene and becomes the prime suspect in the murder, only to become a pawn in a much larger game of international intrigue.

If you like detective stories, this is a must-read; it's as fast-paced and engaging (with equally colorful characters) as The Girl with the Dragon Tattoo, but also an easier read. Also fascinating is the historic and cultural aspects of the story; Nunn was born in Swaziland, South Africa, and her parents actually grew up in Durban, but later moved the family to Australia to escape the race restrictions imposed on them in their home land. Her fiction is inspired by real people and stories from her relatives, combined with diligent research and good dose of imagination. It's a great murder mystery that will have you reading into the wee hours of the night.