Home Subscribe Archives Social Circles About
Back from Boulder
LOHAS

This one's a bit dated, but I still wanted to blog about it because I think it's great.

Automaker Toyota is "planting" giant, solar-powered flowers in various cities across the country (including Boston, but I missed it due to the Colorado trip; thanks, Ed, for bringing it to my attention!).

The flowers generate electricity for up to 10 people at a time to sit and recharge their mobile devices, and provide free WiFi for other passers-by.

It's all part of a marketing blitz for the upcoming launch of Toyota's 3rd generation Prius hybrid vehicle, and the flowers are meant to depict the Prius theme of "Harmony between Man, Nature, and Machine." I'm anxious to see the new model; we got to drive a 1st generation Prius while on vacation, and while it didn't break any zero-to-sixty records, its gas mileage was superb, averaging 45 miles/gallon.

Here's a photo of one of the flowers in front of Boston's Prudential Center; they have since moved on to the next leg of their road trip, which includes New York, Chicago, Seattle, San Francisco and Los Angeles (not surprisingly, some of the cities with the highest market potential for green vehicles). 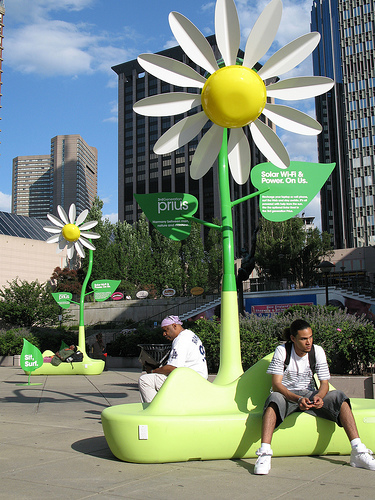 See more photos in the Prius Harmony Flickr set and catch upcoming tour dates on the Prius Facebook page. It looks like Xtension Marketing is the agency behind this; kudos to a job well done.