When we marveled at the beautiful horses that carried the Boston Mounted Police at the Bunker Hill Day Parade on Sunday, we didn't realize it would be for the last time. 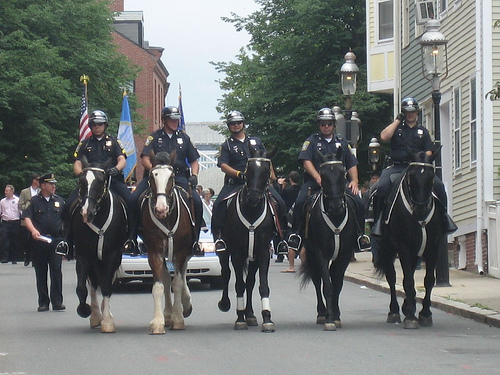 Back in March, Police Commissioner Edward Davis announced budget cuts which included disbanding the Mounted Police Unit, which is the oldest in the country and provides daily community policing, crowd control and other services to the citizens of Boston.

There is a petition site with 2508 signatures, Facebook group with 3045 members, and patrons who have pledged over $200,000 in private funds to keep them from being disbanded and put up for adoption - none of it enough to secure the $600,000 needed to maintain them.

NPR ran a story this morning about a job fair for city workers that confirmed the unit will, indeed, be disbanded and their civilian caretakers (but not any of the police) will be laid off with them.

I feel terrible for the 550 humans that will lose their jobs this month, as well as the equine workers who have been so visible in the city for all the years I've lived here.