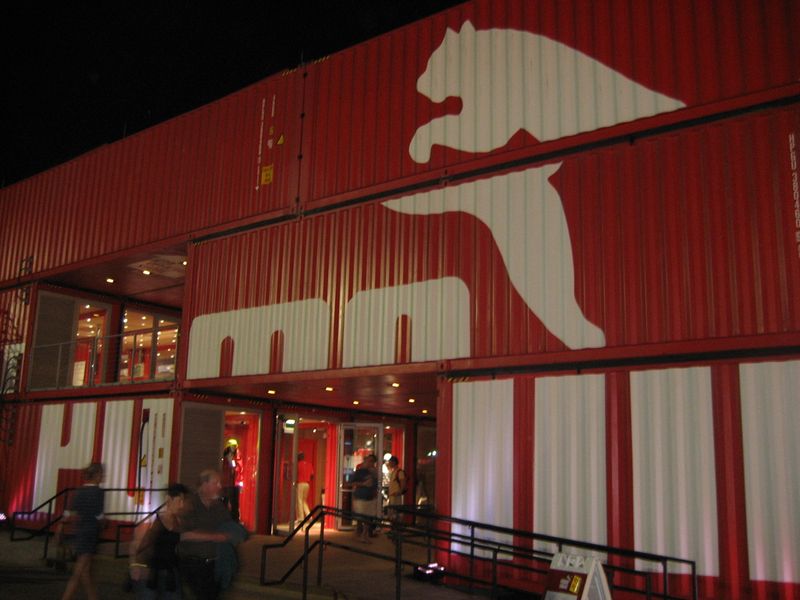 The portable "city" is part of a 3-week celebration while the Volvo Ocean Race is in town, and a huge publicity event for PUMA, one of the official sponsors, whose headquarters happens to be just down the street on Drydock Ave. By joining the race, PUMA has entered a new premium category and launched a full range of marine clothing and apparel.

After a bite at nearby LTK (FINALLY some warm weather here...and we got to eat outside!) we headed over to the event - just in time to beat the crowds who lined up shortly after 9. In fact, the city/containers reached capacity very early, forcing security to turn many party-goers away. But not us - we lucked out and got in early, able to enjoy the warm night on the waterfront in PUMA's open-air bar with a dj spinning hip hop & dance beats.

The space is very cool (see Inhabitat's coverage of it here): the containers are all adjoined like building blocks, but large panels have been removed to give it an open feel. The first and second floors contain retail space, while the 3rd is the bar & patio. The beautiful Volvo and Puma sailboats are docked alongside, and the area surrounding the City - normally an empty parking lot - is filled with other sponsor tents, bars, stages, and flat-screen TVs for viewing the race. Definitely a fun addition to the waterfront, if temporary. But be forewarned: the indoor bar area can get extremely hot (presumably from the 80-degree sun beating down on those shipping containers all day) 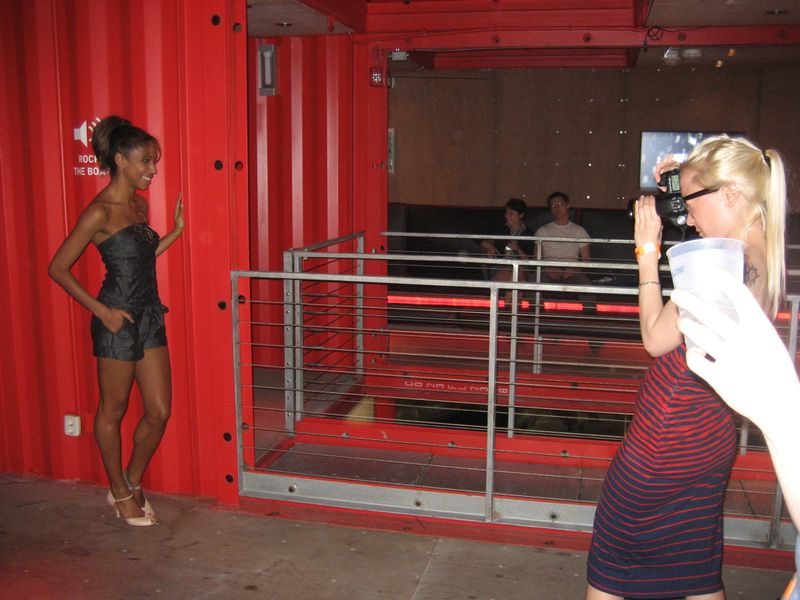 and the bathroom situation is terrible: deluxe port-a-potties (that's not the terrible part) that are not situated in the bar area (that is) - and if you have to leave the party to answer Mother Nature's call, you cannot gain readmittance without waiting in an unbearably long line (see previous note about being at capacity).

Thus, we departed on the early side, but not before the highlight of the night: photographers from The Achilles Project & New Brahmin showed up and snapped pix of my oh-so-stylish friends, Ryan and Shibani. See all the shots here:

Aww, I love the dance shots!!

As for the Puma party... music started out GREAT (oldschool hip hop you'd never hear at a bar in Boston), but then got super random. And the bathroom situation was kinda inappropriate. There must be some kind of law to prohibit what they did.

But our crew rocked the house regardless. I had a blast with you guys :)