Coulter vs. Maher vs. The Audience

Sparks flew last night at the Citi Center for the Performing Arts (f/k/a the Wang Theater), but not necessarily between to the featured guests, diametrically opposed political pundits Ann Coulter and Bill Maher. 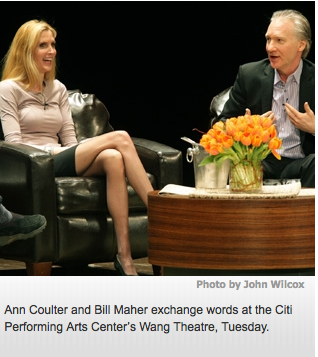 It was the Boston debut of MSG Engtertainment's “Speaker Series: The Minds That Move The World,” a timely production that looks at America’s current political landscape through the eyes of prominent political figures. Coulter and Maher kicked things off on Monday night with a show in New York at Radio City, and then hopped a plane to Boston for their 2nd of 3 nights (tonight was Chicago).

We were uncertain of what to expect, but imagined there would be some good-natured ribbing, if not outright controversy, between the liberal Maher and conservative Coulter. What transpired was actually a rather cordial exchange, with each getting 15 minutes to themselves to share perspectives on the current political state, and then joining together to counter each other's comments. There was the expected Obama-bashing and Bush ridicule, and a few inflamatory remarks thrown in for good measure, but in all, nothing out of the ordinairy if you've seen these two before.

The real controversy came from the audience - a raucous crowd that proved to be more incendiary and outspoken than Coulter or Maher ever was.

After taking a quick poll to understand the audience's political leanings (it was pretty evenly split between those who "think Obama has done a good job so far" and those who, like Rush Limbaugh, "want to see Obama fail"), the MC indicated that there would be no further audience participation, and to please respect the speakers and fellow audience members by refraining from speaking/shouting during the performance. We are priveleged to live in a Democratic society with the right to free speech, and this was an opportunity to listen to opposing viewpoints with an open mind (but closed mouth).

No sooner did Ann Coulter step on stage when the woman behind me started heckling her. Really loudly, with inane comments followed by cackling laughter. Others soon followed. I turned and politely asked her to "please stop talking"; she responded with a crinkled face and loud harumph! and proceeded to gripe. It was unbearable (and unbearably rude) so I inquired, "why don't you leave if you're having such a miserable time?" and that silenced her.

Moments later, when Bill Maher took the stage, there was an outburst in the back: a seated gentleman repeatedly yelled out, "Stop the liberal gestapo!" and other complaints. It was so bad that the show stopped while ushers tried to remove him, but failed (these poor ushers - mostly elderly women probably used to more passive showings like The Lion King, seemed shell-shocked by the controversy and expletives; in a moment of levity during the drama, Maher remarked, "where are the security guards? Oh - the security guards are 75 years old? I see...).

That guy finally settled down, and then another one erupted down front. This time it was "I spent 3 years in Baghdad!" and some more expletives. At this point, Maher lost his cool and yelled at the audience member, "Shut the f@#* up! These people did not pay good money to come here and listen to you! If you have so much to say, you should've worked as hard as we did, and then you would be up here! But you're not, are you Joe Plumber? So sit down and shut up!"

It was unreal. The whole show derailed. Beyond the political divisiveness, the show was plagued with audio problems, which prompted even more shouts from the audience. Moderator William Oksner (who?? All I came up with was this) was a dud. Instead of enemies, Coulter and Maher ended the show looking like co-conspirators who couldn't wait to run off together and commiserate.

In all, it was an entertaining evening, but maybe not for the reasons we had anticipated. Coulter's performance was not what I'd expected; she seemed nervous, her jokes weren't funny, and she clearly wasn't comfortable dealing with hecklers. Maher has presumably had more experience with the latter, and he took most of it in stride; his years of comedy paid off as he was much more glib, engaging, and funny on stage. Coulter seems to need a script, while Maher easily improvized.

But the audience behavior left a sour taste in my mouth. Not Boston's proudest moment.

The Boston Phoenix has a great recap of the drama.

[Photo courtesy of the Herald, who's recap isn't so great, but at least they covered it. Where was the Globe?]

Why are people still talking about me? It's clearly been established that I'm a joke.