Something's fishy at the nail salon.

In keeping with the fish theme this week (see my previous post on The Headhunt Cape Cod fishing tourney), I'm compelled to comment on the fish pedicure controversy sweeping the nation's nail salons.

I first heard about the fish pedicure last Summer, when Mr. John Ho brought his skin-eating fish here from China, in a U.S. nail salon first. Ho, who ran a salon in Virginia with his wife, had been looking at alternatives to pedicure razors, which are effective at removing calluses but banned in many states due to their risk of dangerous cuts. 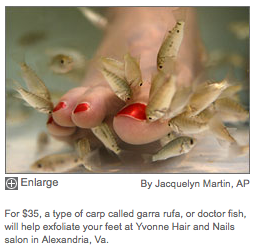 One day, a customer mentioned "skin eating fish" from Asia that piqued Ho's interest. In the course of his research, he discovered an old Turkish legend [from WSJ] about:

a shepherd who injured his foot and stuck it into a hot spring teeming with small fish. The foot healed. Word spread. A treatment center for skin ailments grew around the springs near the Turkish town of Kangal. From Turkey, the practice spread throughout Asia, employing garra rufa, toe-size carp that live in warm water, have no teeth and, according to those in the business, like to suck off dead skin. Another fish sometimes used to treat feet, called chin chin, is bigger in size and grows tiny teeth.

Mr. Ho subsequently introduced the fish to the States and became a media - and cosmetic - sensation. His salons charged customers $35 to have their feet nibbled by fish for 15 minutes.

Until now. At least 14 states have outlawed the fish pedicures, deeming them unsafe. The issue: "Cosmetology regulations generally mandate that tools need to be discarded or sanitized after each use. But epidermis-eating fish are too expensive to throw away." Despite Ho's best efforts (e.g., ditching his original community pool approach for individualized fish tanks where the water is changed between sessions), there's still concern about how safe this practice is. For example, if the fish nibble on infected feet, can they pass it on to the next innocent pedicure recipient?

It's merely a move by the cosmetology board to block competition.

This is so Disgusting... What is Beauty Therapy Coming Too. This has deeply disturbed me. People need to get lives.