McCain in the White House 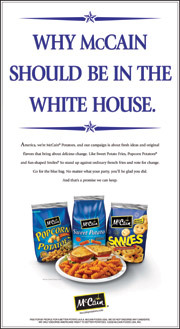 On the eve of the Democratic National Convention, McCain is grabbing headlines in the ad world.

Not John McCain, mind you, but McCain Foods, a Canadian packaged foods company that's taking advantage of its namesake's run for the US Presidency to roll out a new ad campaign.

Ads feature the company's frozen french fries, sweet-potato fries and kid-friendly "smiles" - all of which are trans-fat free and accompanied by copy such as, "McCain goes to war over oil."

There will also be a "Recipes for Change" section on the campaign site when it rolls out later this week.

All jesting aside, this post marks the addition of the "Politics" category to CultureJunkie. Time to get serious and take a closer look at the issues as the clock ticks down to November 4th.