I normally don't use this space to rant, and I don't think I've ever weighed in on politics, but I've been sufficiently aggravated this week to do so now.

It all started with the AdAge Video email that arrived in my inbox on Thursday morning. Towards the bottom I saw this: 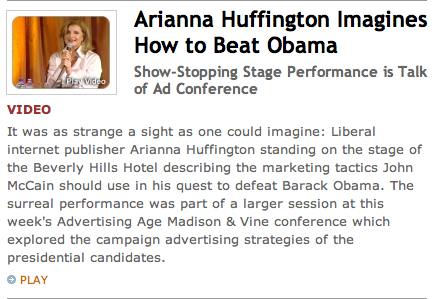 My curiosity piqued, I clicked through to watch the video. In it, Liberal blogger Arianna Huffington pretends she is in charge of John McCain's marketing, and describes what she would do to help him win.

Despite being staged, it's uncomfortable to watch. She plays into the religious fear-mongering that Senator Obama has struggled with since he announced his candidacy (see this and this).

My immediate thought was, "I wonder how long before some idiot lifts this and presents it as truth?" I then did a quick search on YouTube, and lo-and-behold, I saw this: 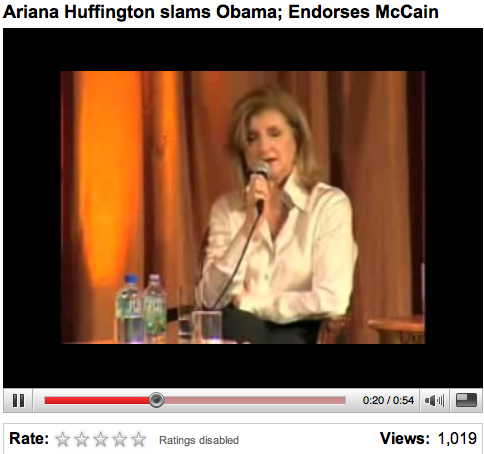 Note the definitive title: "Ariana Huffington slams Obama; Endorses McCain." As you might have guessed, someone edited out the AdAge intro, thereby removing all context for the dialogue, and presented it as a McCain endorsement on YouTube. Where over 1,000 people have viewed the video, many clearly taking it as truth as evidenced by the comments.

What's worse, I tried 3 times to add my own comment setting the record straight, but to no avail. The system apparently accepted my submission (see the feed from "My Comments in the Blogosphere", below), but neglected to publish the comment publicly. Now it looks like I'm just promoting this stupid video.

Honestly, technology is a wonderful thing. Why must people abuse it?

I'm now compelled to read Andrew Keen's The Cult of the Amateur: How Today's Internet is Killing Our Culture.

For a nicer view of the Obama family, check out their recent interview in People magazine (or if that's too fluffy, try his NYTimes Op-Ed piece).

I haven't yet decided who'll get my vote, but I'm open-minded and interested in the truth. Too bad others aren't.

Great write-up. More people need to speak up and rant about information abuses like this. It doesn't matter who you are supporting, this type of behavior is unacceptable.