Ben and Emily explained their challenge: how to reinvigorate the AOL brand among 18-24 year olds, a notoriously skeptical group of digital natives who are quick to see through marketing B.S.

But like any good marketers, the Emerson team conducted focus groups with their intended targets,

where they noticed "energy spikes" in two areas: (1) when participants were story telling (e.g., re-living that time they dumped a girl-/boy-friend over AIM), or (2) when they spoke fondly of the iconic, yellow AOL logo - the "running man." Whenever the conversation turned in one of these directions, the groups became animated and a vigorous dialogue ensued.

The Emerson students - smartly - took this insight and made it the cornerstone of a campaign that leveraged video to build community, create content, and gather insights for AOL [from an audience that's often tough to reach via more traditional research].

On TalkToRunningMan.com, visitors are invited to do just that - have a frank conversation with the Running Man about how he's impacted their lives over the years. From the site:

You have known him since middle school. He gave you the confidence to ask out your first significant other, and he also helped you guys break up. You two played pranks and shared great memories. But now, you two aren’t speaking much and he’s feeling a little lonely. Maybe you’re scared and don’t want to share your feelings yet, but Running Man is ready and wants to hear it. So go ahead, tell him. Let him know how you really feel. He’ll appreciate it in the morning. 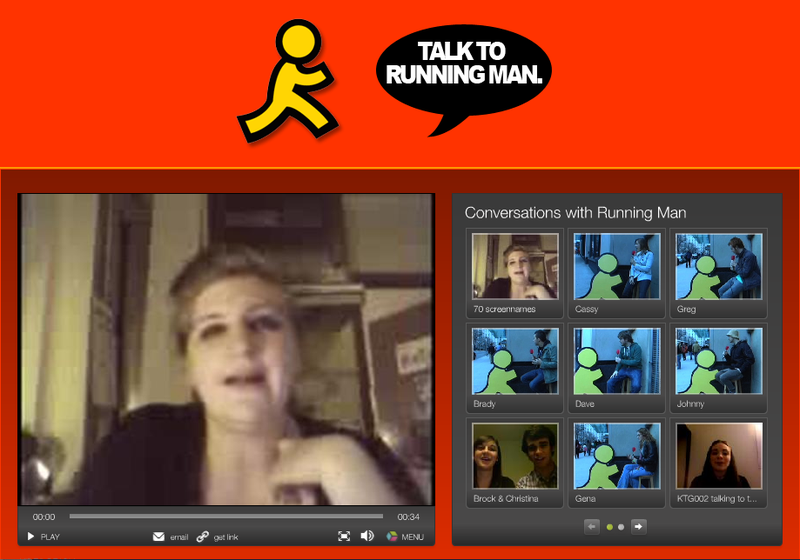 Go ahead and check it out. There's some funny stuff up there. What I like about it is that it's connecting the brand with individuals in a very personal, endearing, and transparent way. And it's unedited and humorous enough to earn its viral marketing stripes (as evidenced by me talking about it here).

As Mr. Lawfer concluded, "honesty and transparency are the killer app" - and the Emerson team nailed it for AOL (although whether their efforts can really turn around an aging brand remains to be seen).

There are some additional good comments (including constructive criticism) about the campaign (plus the great video player technology presented by Overlay.tv) over on the Ignesis blog.

Great recap of the event. I agree, the Emerson group was one of the most compelling stories from a strategy and execution standpoint. Also really enjoyed the discussion and learning's presented by Rob Lane about Overlay.TV, alot of potential there for smart marketers.