Those who've followed my blog for awhile know that I often comment on advertising and marketing programs that catch my attention...ones that aren't necessarily related to my day job (or they'd appear on ART+science), but have succeeded in "breaking through" - to me, anyway - in some manner.

The latest brand to do this is Canadian Club Whisky...damn right your dad drank it!

Truth be told, my participation in a Canadian Club BzzAgent campaign is what prompted me to write this post, but I had in fact seen this new campaign recently and was impressed enough to write about it (after the good folks at BzzAgent so kindly reminded me of its existence).

So what's the buzz? Canadian Club has a fantastic new campaign in market, designed to position it as the "go-to masculine cocktail that provides the right level of style and sophistication without being pretentious."  Full of kitschy photos from the 60s and hilarious tag lines, the ads are getting the attention of masculine & feminine alike.

I signed up for the BzzAgent campaign thinking I'd get a free bottle of booze...if not for me, then for my dear old Dad (he likes Manhattans). Lo and behold, my package arrived sans alcohol, but with an $11.99 rebate, CC-branded cocktail glass and t-shirt (score), and three wildly funny posters from their new campaign.

Your Dad Was Not A Metrosexual.

This is CC's first campaign in 20 years (courtesy of Energy BBDO, Zenith Media, and Moxie Interactive), and I love it. When faced with a seemingly tired brand, Canadian Club elected to embrace its legacy and inspire a new generation of whisky drinkers, rather than try and reinvent itself.

Your Dad Had Groupies. 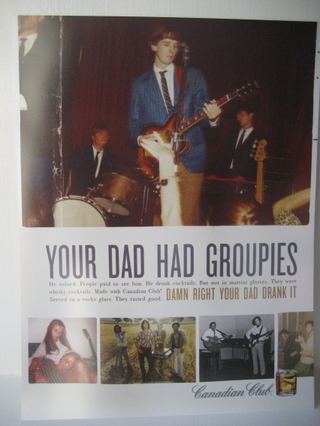 "Canadian Club is what your dad drank back in his day, when he was stylish, went out to bars and nightclubs with friends and got girls' phone numbers. He was confident about his drink of choice. It was sophisticated and tasted good...he chose Canadian Club. Classics don't go out of style."

Your Mom Wasn't Your Dad's First. 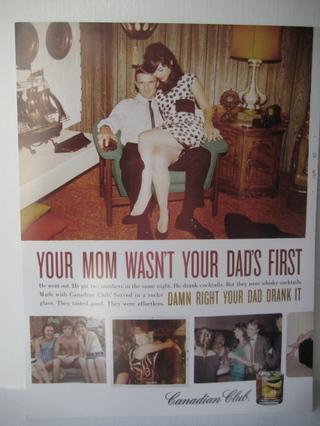 The company was actually founded in 1858 by an American businessman who made Windsor, Ontario, Canada his headquarters, in order to avoid the growing temperance movement in the States. There's even a CC Brand Heritage Center on the bank of the Detroit River where you can learn all about the high-end distillation process they employ.

The pictures in the campaign are real photos of employees and family members of Canadian Club. Most of the 30-somethings they're targeting will relate to the grainy pictures, as they likely have similar old family photos themselves. It combines the hilarity of the Old Spice campaigns with the boldness of Cadillac's more recent turnaround.

So go out and get some Canadian Club. You can find it at most liquor stores ($12 and up) and bars in over 150 countries! And CC has kindly posted drink recipes on its site. While you're there, make sure to customize the CC ads with your own photos - I tried it and it's an easy & fun application.

OK, I'm off to enjoy a night cap. All this whisky talk has made me thirsty :)

PS: lest you think my post is riddled with typos, CC Whisky is in fact spelled without the "e". The difference between "whisky" and "whiskey" is where it's made: whisky is from Canada, Scotland, and Japan, and whiskey is from the US and Ireland. The rule of thumb is that if the country name has an e in it, than so does its whiskey.