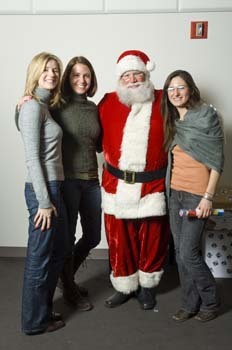 Charlestown, MA, is all decked out for the holidays. Walking through its snowy streets gives the illusion of being in a small town, instead of a neighborhood on the edge of downtown Boston.

Last week, they held the Christmas Tree Lighting and Sing-along in City Square Park, and I spotted old-time carolers singing on Main Street this weekend: 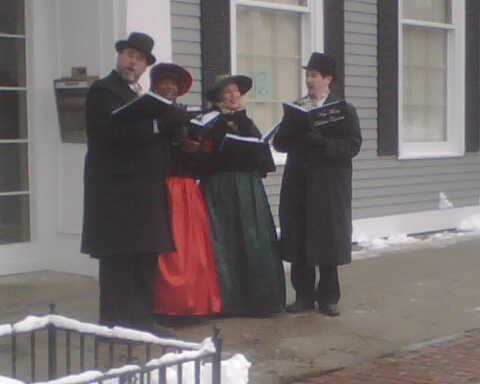 Local shops like Edibles by Evers (my new favorite spot for gourmet food and cooking items) and Joy of Old did their part to extend the small-town holiday feel as well. 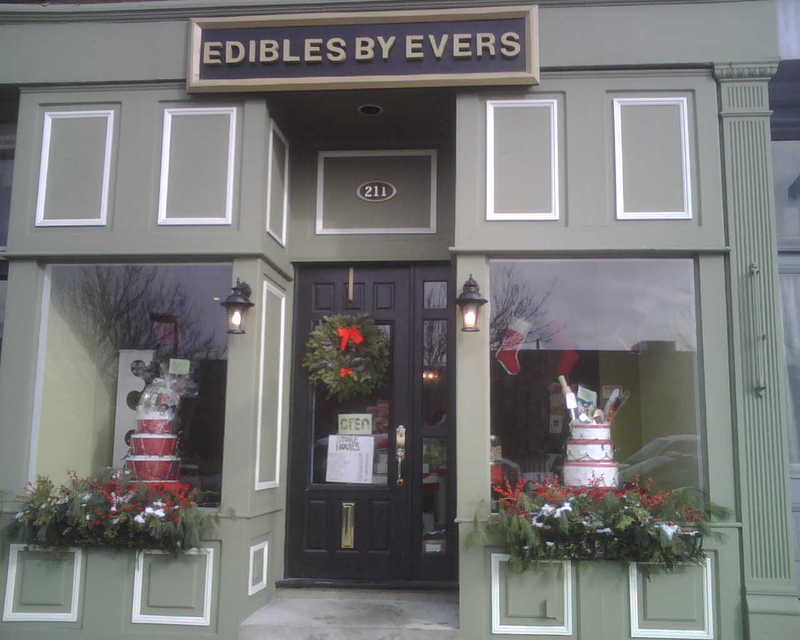 The British Royals have created a YouTube Channel, where 81-year-old Queen Elizabeth will broadcast her 50th Christmas message.

Her first message, delivered live to the nation and its colonies on Dec. 25, 1957, still has some relevance, as she ruminates on the pace of technological change. 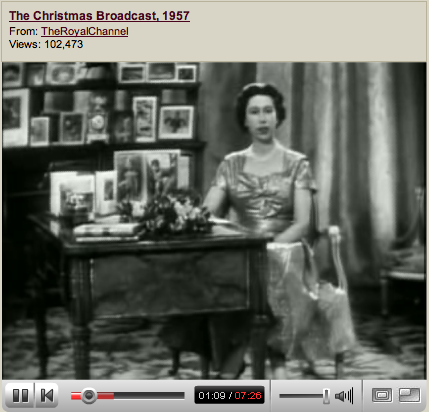 The Palace has posted both archival and recent footage of the Queen and other royals on the channel, including a silent newsreel of the Queen Mother's wedding in 1923. (They have disabled the "embed" feature, however, so you need to click through to YouTube to see the footage) 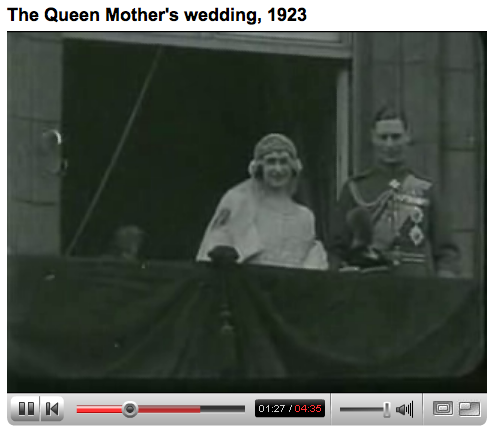 This year's Christmas broadcast will appear on this channel at approximately 1500 GMT on Christmas Day.

ChinaReview.cn reports, "Showing a canny knack for keeping ahead of the times, the Queen launched an official Internet website for the British monarchy in 1997, owned an iPod since 2005, and last year her Christmas message was made available as a podcast for the first time."

Holidays Gone to the Dogs 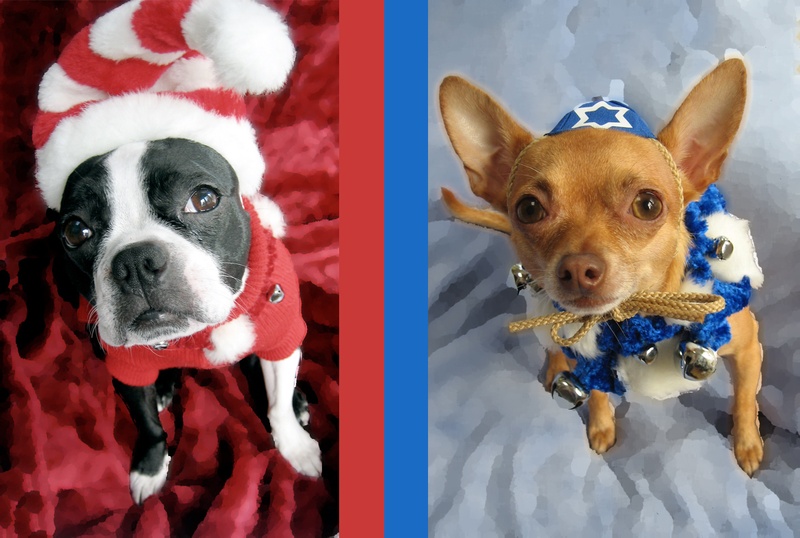 Time to be a kid again.

Some words of wisdom from my colleague, Doug:

Remember when you were actually thrilled when it snowed during the holidays?

Remember what it was like to be so excited about the next day that you couldn't get to sleep?

Remember when the little things truly did make you extremely happy?

This holiday, be a kid again. Run around in the snow. Build a snowman. Go ice skating. Go sledding. Forget everything you already know. Be a kid and the holidays will truly be HAPPY.

Kelly is a boy's name, too.

I love this J.C. Penney ad:

If you can't read the note, it's a plea from a little boy who just received a bunch of girl's toys, and it reads, "Dear Santa: Kelly is a boy's name, too. From, Kelly."

The music is festive, the child adorable, and the message humorous and to the point: consider a J.C. Penney giftcard for those on your holiday list.

I have to congratulate Saatchi & Saatchi, the agency behind the spot. Their work has been getting my attention lately - and for a brand I wouldn't normally notice (despite my new-found love for AJ Wright).

During this season of Friday Night Lights (a must-see, if you don't watch it), J.C. Penney has been running spots mid-programming that are designed to re-cap the first half of the show for those who tuned in late (could be courtesy of media partner OMD, vs. creative shop S&S).

At first, I thought it was silly, because who, in this age of DVRs, would miss the first half of the show?? But then, I realized that it is brilliant because we have DVRs:

If I fast-forward through commercials during FNL, I press play as soon as I see the characters on screen again, thinking that the show has started. But no - it's the JCP spot, recapping the early scenes, which I rewatch while getting the JCP brand association. I'm curious to learn if that was the intent, or just an added bonus.

JCP did miss the integration boat, though - it would have been nice if they sponsored the corresponding online episode recaps to further strengthen the association with this audience.

OK, it's been awhile since I've blogged. Sorry...it has been a busy few weeks!

But yesterday I dropped into the local AJ Wright on the hunt for something to wear to tonight's Ugly Sweater Party (more on that later) and came across this: 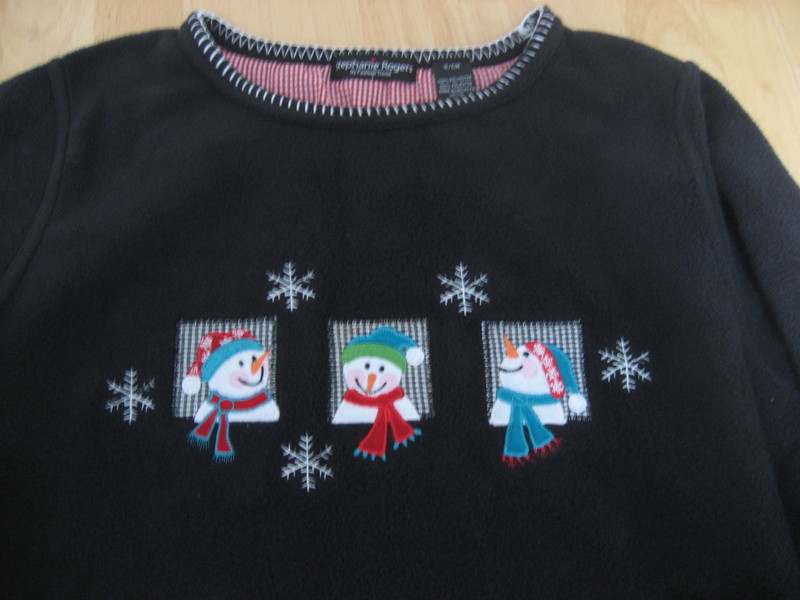 No, I wasn't drawn to the clever snowmen on the front, and it wasn't sufficiently ugly for the party - it was the label that caught my eye. Take a closer look: 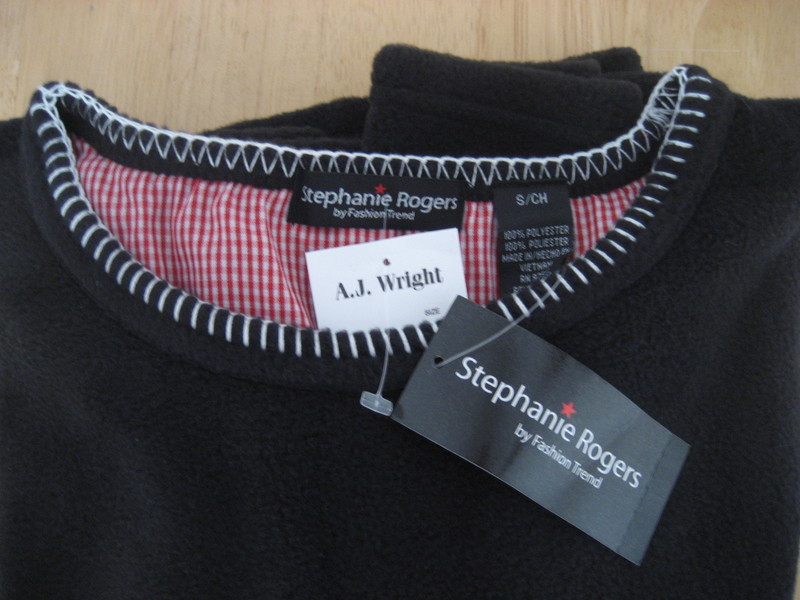 Yes - I stumbled upon an item from the Stephanie Rogers clothing line!  And at a cool $15, my namesake top was surely - as AJ Wright puts it - "the Deal for Real."