And now for my long overdue notes on Podcamp Boston 2. I'll keep it brief since a week has passed, and I'm suffering from a bit of social networking fatigue, a topic that was in fact covered at the conference.

There were dozens of great panels during the two-day event; here is a sampling of the ones I attended:

I started off with John Havens' Transparency Manifesto, in which he asked the simple question, Who are you online? With the rise of social media, including blogging and consumer-generated content, transparency has become more important - both for corporations and for individuals.

Social networking sites like Facebook, MySpace, and LinkedIn demand that their participants delicately balance transparency and full disclosure. How do you know if what you're reading online is true? And what can you do if you come across something that isn't...particularly if it's related to your own brand (personal or corporate)?

The challenge with transparency is that the onus is on the individual to exhibit prersonal responsibility when they publish information online. In my opinion, many people don't understand the culture and permanence of the blogosphere and instead view publishing tools as a source of empowerment - or entitlement to write anything they want (sans prudence or fact checking).

A gentleman in the audience named David remarked that we've learned in society that you can't rely on personal integrity, so we developed social contracts (laws, rules) to manage standards. This hasn't yet happened in the blogosphere, so we we're experiencing anarchy of sorts.

Interestingly enough, Kevin Mullins' Web 2.0, Enterprise 2.0 and Beyond picked up on this idea, but in a different vain: anarchy is what makes Web 2.0 work.

2.0 is all about Democracy, which is the antithesis of control. So how do you define control in the corporate world, particularly in heavily regulated industries like financial services and healthcare that demand it? The general consensus is that the only way to "control" it is to participate. Either by engaging in the existing conversation (blog) as a reader or participant, or hosting the conversation internally. I've had some experience establishing blogs for clients and have found that internal and external blogging policies (like the Code of Conduct on the HomeGoods blog) are important to establish. They are not meant to control the conversation in the traditional sense, but rather keep it on track and establish a process for crisis communication if needed.

Another emerging area that still lacks agreed upon standards & methodologies is Social Media Metrics, the topic of Beth Kanter's session. Beth's advice (with which I agree): don't rely on metrics to determine whether your community is successful; instead, rely on them to understand your community better. We are conditioned to think metrics = performance, but today we can't really look at them as absolutes. 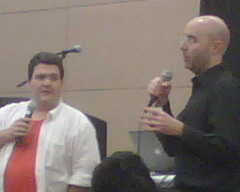 Isabel Hilborn's Social Media for Business covered the benefits of thought leadership communities - bringing together experts in a group blog, either created by or sponsored by a brand.

Near the end of day two, Kosso got Down and Dirty with OPML, RSS, and Social Multimedia Networks, while David Cutler discussed Social Media Business Models (namely, subscription, advertising, sales, or none at all!)

And last, but certainly not least, Joe Cascio asked, Is there a Cure for Social Networking Fatigue? The conversation focused mostly on Joe's desire to make OpenID a universal standard for maintaining profile information (although I myself am still intrigued by apps like Minggl, which don't work with commerce sites but surely are a solution to managing multiple social networking profiles).

And on that note, I will end this post...because I am fatigued.

Excellent Summary. Thanks for taking the time to do it!