I came across this stunning photo in the October issue of National Geographic magazine (click to enlarge): 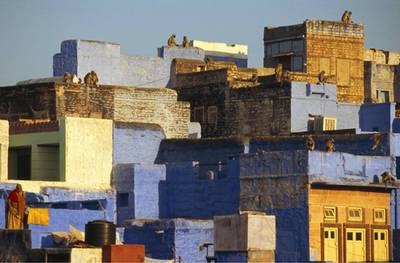 Taken by Belgian photographer Jean-Pierre Zwaenepoel, the caption reads: "The blue walls of Jodhpur (India) traditionally marked homes occupied by high-cast Brahmans. The rooftop langurs, believed by Hindus to be avatars of the monkey god Hanuman, freely roam the city." [links my own]

Each month, National Geographic publishes breathtaking photos like this one in its Visions of Earth series. Well worth a look.