So Many Industry Events!

It feels like the late 90s again, judging from the number of marketing and technology networking events popping up around town. After years of lurking behind online profiles, Boston's best are coming out to shake hands in the flesh! 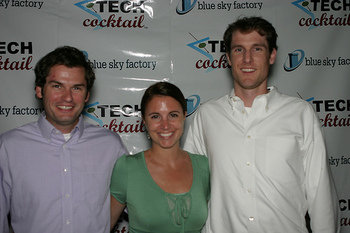 Last night I attended the first TECH Cocktail Boston event, which drew a crowd of 500 to the Tequila Rain nightclub on Landsdowne Street.  That's me with Jeremy from FlipKey and Steve from TripAdvisor.

TECH Cocktail is a series of mixer events, founded by Frank Gruber and Eric Olson, opened to bloggers, technology enthusiasts, entrepreneurs and other business professionals interested in the technology arena. The evening featured a free open bar, music, and fun activities from the sponsors: Compete.com, ZoomInfo, Northbridge Venture Partners, and Geezeo.com. View the Tech Cocktail Flickr set for photos.

On Monday night, the Web Innovators Group is hosting their regular gathering at the Royal Sonesta in Cambridge, where a variety of startups will showcase their wares to an assorted group of technologists, investors, academics, and general business people. The last event was standing room only, and I imagine this will be, too, given the hundreds of names on the RSVP list. Sadly, I won't make this one due to a BIMA board meeting the same night.

Also in the next couple of weeks, Ryan Barrett is initiating a night out for local female bloggers (date/location TBD) and BIMA is hosting its 3rd Annual Cross Media Forum.

Later this month, the folks at Compete bring us the 2nd installment of Tastybytes,

a nod to the West Coast's popular Lunch 2.0. It's designed to be a fun, informal way to bring people together for networking and conversation about the Web, marketing and technology. It's happening September 20th at the Rowes Wharf Hotel, and is cosponsored by Yahoo!

And in October, we can look forward to Podcamp Boston, a 3-day event to connect people interested in blogging, podcasting, social networks, video on the net, and new media.

Phew...it's going to be a busy couple of months!

correction... geezbo was the money booth... right?! if I won the house on the cape prize I would probably remember huh?!

The tech cocktail event was so much fun! How about Meebo's money booths. Hilarious. What a great time.