Home Subscribe Archives Social Circles About
What the Fluff?
At the Playoffs

A Night in the Clink

I finally paid a visit to the new Liberty Hotel last night, on the recently refurbished site of the old Charles Street Jail. 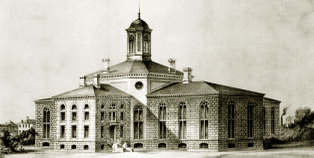 The jail, which housed infamous inmates since the 19th century (including disgraced Boston Mayor James Michael Curley and notoriously convicted Italian immigrants Sacco and Vanzetti), had stood empty since 1990 when it was closed due to poor conditions.

Now, in addition to all the luxurious accoutrement of a boutique hotel, it boasts two bars: Clink, in the upper lobby, and Alibi on the first floor. 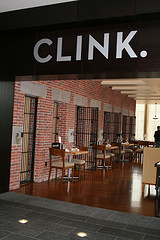 Clink occupies the open area at the top of the lobby escalators, beneath a magnificent  90-foot rotunda (the former indoor exercise facility for the inmates). There is a smallish dining room with a tasting menu, but most of the action is with the bar patrons out front [in the lobby]. The building's architecture is phenomenal to gaze at, but sadly, the bar itself doesn't provide much ambiance.

While Clink is very bright (too bright) and spacious, Alibi is very dark and 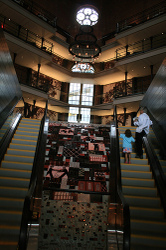 It, too, has a full bar, but a limited choice of specialty cocktails and no food. It seems better suited to "date night", with a fair amount of 2-person high-top tables and intimate nooks for enjoying cocktails and conversation. There are several areas for larger groups to congregate, but the floor space is limited, and the tiny little stools clustered around low tables are rather uncomfortable. Alibi does have a large outdoor seating area, however, which will surely be popular in warm weather.