Social Proprioception: Where You At?

I've been thinking a lot about the convergence of the virtual and physical worlds lately, and the concept of presence. The geographic anonymity of the Web is going away as more and more people elect to share where they are and what they're doing at every waking moment. 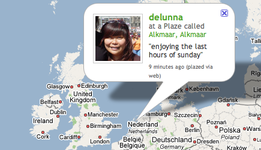 My interest in this concept was peaked back in March, when I conducted my Twitter experiment while down at SXSW. At the time, I used the micro-blogging platform to not only keep up with the whereabouts of fellow conference attendees, but to keep my own network - both in Austin and back at home - abreast of my minute-by-minute activities. It was fun - and quite useful - while it lasted, but I ultimately unplugged because it was just too distracting.

And while Twitter naysayers abound, more and more services are popping up that enable a similar level of location awareness (Loopt, Dodgeball), geo-tagging (Panoramio, Plazes), and content sharing (Jaiku, Tumblr). To many, this level of transparency is eerie and voyeuristic, but to the kids that grew up using instant messenger applications - where regularly updating your "away" message is de rigeur - this is just the latest way to keep their networks informed of their whereabouts.

Clive Thompson writes about the phenomenon in this month's Wired magazine, in which he keenly likens it to proprioception, the body's unconscious ability to sense the position and orientation of its limbs. He writes:

That subliminal sense of orientation is crucial for coordination: It keeps you from accidentally bumping into objects, and it makes possible amazing feats of balance and dexterity. Twitter and other constant-contact media create social proprioception. They give a group of people a sense of itself, making possible weird, fascinating feats of coordination."

The value of Twitter is not in scrolling through the random posts on Twitter.com, but in actually using it with a group of friends or colleagues to build a tactile sense of community.

I'm interested to see how this level of hyper-connectedness plays out. Will it be just a phase, or will it become a social norm? I personally like to go off the grid once in awhile, and find the frequency of microblogging a bit much.  With that, I'm going to log off...and you'll all just have to wait until the next time I post to find out what I've been up to :)