Yesterday I visited my first advertising upfront - traditionally a time when the national television networks unveil their Fall programming lineup to a slew of eager broadcast ad buyers, but increasingly an event for us digital folks, too.

My coverage of the new media implications on the upfront are posted at the HHblog. Here, I'll share all the fun behind-the-scenes stuff (currently limited to pictures shot with my BlackBerry Pearl; will upload from the Canon when I get home).

My full NBC Upfront photoset is/will be available on Flickr, and details on all the new programming is at the NBC Fall Preview site. 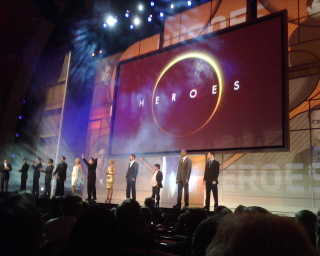