After some delay (2 hours on the runway at Logan while the flight crew worked out a "mechanical problem"), we finally arrived in Las Vegas this afternoon for the 4As Media Conference. Much to our surprise, it was a bit chilly and there were snow flurries when we landed!

But everything was warm and sunny inside the grandiose Venetian Hotel, our headquarters for the remainder of the week,which is attached to the event location, the Sands Expo. Although I've been to Vegas numerous times, this is my first time staying at the Venetian, and wow - it is enormous. Every room is a suite complete with bedroom and sitting area/office (I even have my own FAX machine in my room so I can relive the 80s!), and mine overlooks a lovely courtyard and pool. There's even a Canyon Ranch outpost here!

Besides gambling, eating is big business here. The hotel is home to 18 restaurants; all look delicious, but we settled on an Italian (what else?) spot

called Canaletto to grab a late lunch after a long morning/afternoon. It is surrounded by the Venetian's famed canal, complete with gondolas, and numerous street performers (all indoors, mind you). As an aside, I compelled to share this  factoid: all the  items in the room's mini bar are equipped with sensors, so you get charged for them even if just pick them up! You touch it, you own it. Unreal.

Now, after a bit of work, I'm headed back out to check out the exhibit hall for the show and attend the opening reception. Later, we're headed to the Wall Street Journal event at Tao Nightclub where I'll be on high alert for celebrity sightings. Although it will be hard to top that Alan Thicke sighting at Mandalay Beach Club last fall :)

More on the media and marketing front tomorrow...

Next week I'll fly to Austin, TX, to attend the 14th annual South by Southwest (SXSW) Interactive festival. It is four days of keynotes and panel programming featuring over 250 digital creatives and new media entrepreneurs.

And in true new-media fashion, the event managers allowed the community to vote on programming via an online panel picker (voting closed last October, but all submitted ideas are still live). Confirmed speakers are listed here.

The theme for this year's event is Communications Leadership: Increasing the Odds for Success; it will take place at the Venetian Hotel in Las Vegas.

Over 1500 media professionals are expected to attend, and over 50 speakers will cover such topics as search engine marketing strategies, integrated marketing case studies, and measuring new media.

This is a long overdue plug for my colleague Ernie Schenck's book, The Houdini Solution.

In it, he uses the acts of the famed magician Harry Houdini as an analogy for solving real-world business problems. The concept is simple: instead of thinking "outside the box," leverage its retraints to spark creativity...much like Houdini did while wrapped in chains, locked in an air-tight container, and submerged in water.

In other words, instead of letting your mind be consumed with the problem before you, direct all of your energy towards solving it. This requires a different way of thinking, and Schenck helps by debunking the 14 most common myths about (and limitations to) creativity.

The biggest mental shift required is in viewing restraints as a positive, rather than negative, issue. He likens them to the banks of a river, which keeps the water focused and moving in one direction, rather than an undirected, formless mass.

Overall, the book is an enjoyable and quick read; for me, it harkens back to John Winsor's Spark, which also deals with finding creativity. The parallels between the two books are interesting:

Schenck: "It's how you connect things - disparate things, things that at first seem odd together  - that's at the true core of creativity."

Winsor: "A spark wouldn't happen if there weren't a difference between one end of the spark and the other. It's in that gap that the potential exists."

Schenck: "We come into this world with an open mind; as we grow older, our thinking becomes more structured, even rigid."

Winsor: "As a point of illustration, take an excerpt from Gordon MacKenzie's book, Orbiting the Giant Hairball, in which he recounts the experience of going into a kindergarten classroom and asking how many of the kids were artists. Being wide-eyed kindergartners, they all raised their hands. MacKenzie contrasts this with the experience of asking a sixth-grade class the same question; only a couple of kids raised their hands."

While Winsor focuses more on creating the environment that ignites creativity, Schenck devotes his time to embracing the hand you're dealt. Both approaches translate far beyond the world of advertising & marketing, and can help when dealing with the everyday constraints that are part of life (bey they financial, professional, geographic, or physical).

The genie pants that MCHammer made (in)famous in the 80s are making a comeback.

I think Marc Jacobs was the first to horrify by unveiling his line of billowy short pants on the catwalk last Fall, and again at Fashion Week earlier this month (where even the skinniest of models look pear-shaped in these things).

Now I see that the Victoria's Secret catalogue has unveiled genie pants for the masses:

Please, someone put this genie back in the bottle!

Our friends at PSFK are hosting an afternoon of new marketing inspiration next month in NYC. See an overview of the conference speakers here.

A Cambridge-based start up called  Dotted Pair just launched a new shopping site called BrowseGoods.com that is based on a unique visual search interface. Check it out: 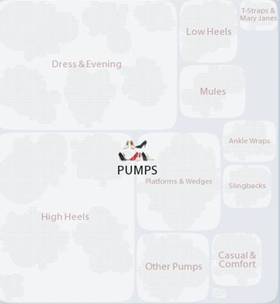 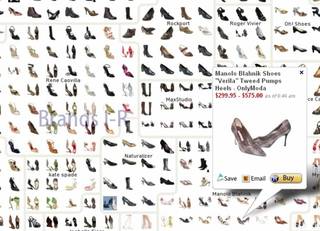 If I select shoes, I'm presented first with different categories upon which I can drill down to a screen full of shoe images.

Every page offers pan and zoom similar to Google Earth and Map applications. It's designed to replicate the experience of shopping in a store, where products are organized by department/aisle/shelf/item.

While most ecommerce sites are designed for direct searches (not browsing), Dotted Pair notes that  twenty-five percent of offline purchases occur through undirected browsing, and shoppers who start their searches by exploring constitute a large and under-served market on the Web.

I mistakenly thought this was an Amazon.com beta application, but have since learned that Amazon is simply the first (of many?) affiliate partner for the site. It's currently limited to shoes, toys, sports, and watches, but hopefully will grow to include other categories.

Join us for coffee at this month's likemind.bos event.

We'll gather on Friday, February 16th, around 8am at the Starbucks at 755 Boylston St.