It was a full house at the Marriott Long Wharf, where marketers, publishers and agency folks alike gathered to discuss such hot topics as consumer generated content, blogging, time- and place-shifting, media fragmentation, and how it's all affecting our business.

The panel was [humorously] moderated by TS Kelly of Media Contacts, who in the true spirit of the evening asked audience members to text in their questions throughout the evening on their mobile phones. Panel participants included:

Keynote speaker Josh Tyrangiel, Editor of Time.com, kicked off the evening with a comprehensive look at the changing media landscape and challenged the audience with this bold statement:  "If you don't embrace it, you're dead."

He went on to recount some of the more notorious stories from last year when companies did try to embrace this new world order; some saw success, while others failed miserably. He highlighted Chevy's attemp at consumer generated media (which I blogged about last year and still consider a win, despite the negative responses it elicited). He also mentioned Proctor & Gamble's decision to post its recipes for toothpaste and laundry detergent online, in an effort to leverage the wisdom of crowds and come up with some truly innovative product improvements.

Someone made reference to "Web 3.0" - the additional layer of artificial intelligence on top of content (1.0) and interaction (2.0) - believed to be the next big thing beyond today's social computing construct. But Brian Haven, who is a recognized authority on emerging media and social computing, refutes this numbering schema: he thinks we'll continue to see an ongoing evolution in the Web environment, but no more seismic shifts.

The group also discussed the changing nature of metrics: while 1.0 Web success was generally measured in eyeballs and clicks, 2.0 warrants a closer look at engagement metrics like time, attention, depth, communication, submissions, pass-alongs, etc. Interestingly, no one mentioned leads or sales!

And judging from the audience questions (e.g., "Does podcasting work?"), people are still confusing tools and channels with stand-alone solutions. Podcasting, RSS, and even broadband video - like email before them - are simply distribution mechanisms for your content. If you don't start with compelling and relevant content, then none of these channels will work.

It's too bad BIMA's recent online poll didn't break down the '07 budget allocations to include some of these newer channels; it would have been interesting to see if the Boston audience intends to embrace any of them in the coming year. 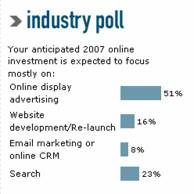