Last Spring I created a profile on Ziki, one of the many social networking sites to come on the scene in recent years. Ziki was new, and given my interest in social nets, I was curious to check it out.

Back then, Ziki was dubbed "the first open social network connecting people based on who they are, what they're interested in, and what they're looking for." This site was (and still is) all about syndication, rather than publication. Whereas other social networks encourage members to publish original content, Ziki's role was to aggregate your content from other sources (blog posts, del.icio.us links, and Flickr pools, for example) and neatly syndicate the feeds all in one place. I liked the simple layout and "Web 2.0" functionality it employed (tagging, in particular), and even connected with a few folks who have similar interests (very easy to do given the tags).

But I was interested to see a post on PSFK this week announcing a new service from Ziki which helps members "optimize your online visibility." In fact, it's not just a service, but an entire repositioning of the Ziki brand. Note the catchy tagline they've added to their logo:

Here's how it works: the first 10,000 members to respond can take advantage of an offer whereby Ziki will bid on your name in Google, Yahoo! and MSN, thereby assuring your Ziki page comes up high in the rankings. The offer is limited to $10/person worth of sponsored links over a 1 year period. It's unclear what happens after you exceed those limits, but presumably they will move to a paid model (I'm assuming this is more than just a marketing stunt to get the Ziki name out there, given the new tagline...but who knows).

The company now refers to itself as "a new type of service dedicated to people and companies who want to get their image under control and promote themselves over the internet."

As for MyZiki, they are currently processing my request; it will be interesting to see if I'm able to bump the Stephanie Rogers Band out of the top spots! 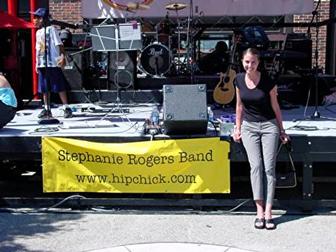 UPDATE via AdPulp: another startup called ClaimID lets you classify, annotate, prioritize and share the information about you found online, so that people who search for you are able to see the identity you want to present.

I always find it funny when agencies claim to "specialize in viral videos."

Certainly there are things you can do to encourage people to share clips (e.g., add "forward-to-a-friend" and "embed" features) and there are basic principles that lend themselves well to "going viral" (e.g., offer an incentive, make it entertaining). But it is very difficult to predict when and if a campaign will ever go viral.

So I found this clip particularly humorous.

Thanks to American Copywriter for sharing this beauty. It's brilliant.

OK, so I blog. Occasionally I talk about XML. I've been accused of being white and nerdy. And I'm fine with that.

But please don't buy me this sweatshirt for Christmas, because I will not wear it. Really. I have a personal brand to protect! 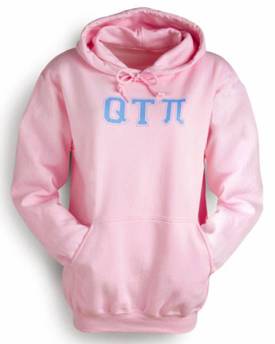 On this, the largest shopping day of the year, I want to highlight one particular retailer who's doing it right.

I visited the Cole Haan store on Newbury Street recently and purchased a lovely pair of shoes. While trying them on, I had casually mentioned to the sales woman that they would look particularly nice with a certain dress I own. I proceeded to pay for the shoes and left the store.

Soon thereafter I received a postcard in the mail from that very saleswoman. It said, "Stephanie, Thank you for shopping with us...I hope the shoes worked well with the dress. Let me know if there's anything else I can do." 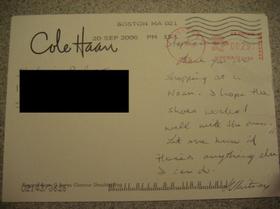 Such a simple gesture, with such a big impact.

I received a similar note from the Coach store in Copley Place when I purchased an item there earlier in the year.

I have to hand it to these big, so-called masstige retailers that have been able to deliver quality goods on a mass scale and still maintain a personal touch.

For a 30-second investment at the register, plus the cost of postage, they made a positive brand impact and generated true word of mouth.

And ok, fine...I'll come back and buy more things soon (like they really needed to send the postcard for that to happen!)

Lots to be thankful for this year! 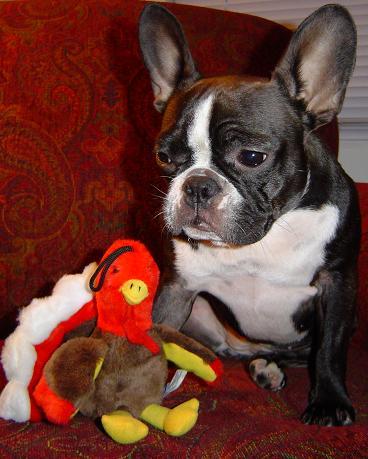 Time Warner Cable announced this week that it has (finally) rolled out its interactive advertising system in NYC, and 2 big marketers are testing the waters: General Electric and General Motors (with American Express and Warner Brothers to follow).

Back in my Digitas days, I worked with a team at General Motors to launch the GM Virtual Showroom on the Time Warner, Comcast, and Cox cable networks. Research had shown that people were interested in viewing new vehicle information - especially hero shots of the car, interior/exterior features, and 360-degree spins - on the larger screens of their televisions (vs. their computer screens).

So we built a showroom which people could (still can) access on-demand with their television remotes, and we dreamed of the day when we could drive traffic to the showroom via a traditional :30 spot with a digital overlay that would tunnel through to the long-form video.

That latter part, while technically feasible, had not been fully operationalized by the MSOs (cable networks) at the time, so we used other means to drive traffic.

But now the dream has been fully realized, and I'm anxious to see how it all works out. I think the tv/computer convergence angle is going to be huge. People are getting much more comfortable interacting with the on-demand systems (although the programming guide interfaces leave much to be desired), and marketers are dabbling in direct response/fulfillment activities (e.g., opting-in to a program via the remote control, or requesting more information).

Digital cable set-top boxes contain your billing information, which means fulfillment - and targeting at the household level - is doable. It's only a matter of time until this takes off.

Random assortment of things that piqued my interest today:

SearchViews reviews a new service Reputation Defender that aims to seek out and destroy personal information on the Web. Given the popularity of Googling potential new hires, roommates, dates, etc., this service could see some success. It's currently aimed at individuals and parents of minors; it'll be interesting to see if & when business attempt to control their online reputations in this manner.

Facial recognition search engine Riya has launched a new offering dubbed Like.com that takes both text and image queries to return (allegedly) similar results. If for example, you covet the blouse your favorite celeb is wearing in a photo on the Web, the "likeness search" feature will return items that look similar. Alternatively, you can search for products by text descriptors, like "black turtleneck." Not sure the text search is ready for prime time, though...a query for "denim skirt" returned 205 results - all shoes, and only a few denim!

HGTV.com has integrated the mobile channel nicely into their online content offering: do-it-yourselfers who watch how-to videos on their site can now have project shopping lists texted to the phones, so they are readily available when they make a trip to the home improvement store. Good example of branded utility.

The 'net is littered with my profile. Friendster. LinkedIn. Ziki. MySpace. Ryze. Classmates.com. The list goes on.

I'm fascinated by social networking, so I tend to experiment with new sites as they pop up. But it's gotten to the point where I don't have the energy to create yet another profile.

And I've been saying for awhile that if someone could create an app that would allow me to update once, publish multiple times, that would be the killer app.

Well, the good folks over at AdRants reported back from AdTech New York today about a start-up called Minggl (LOVE the name) that provides a browser toolbar which brings together all of your social networking sites and allows you to edit and share them in one place.

The site seems to be password protected right now (despite the claim from creator Dewey Gaedcke that more info is available at Minggl.com) so I haven't seen it yet for myself, but I'm anxious to use it!

Shuga has rolled out a line of gadget bling that goes beyond the fancy iDiamonds ear buds i blogged about last Spring.

In addition to stereo-quality earphones, they've introduced silver- and gold-toned desktop accessories like a wireless mouse and Bluetooth headset (which disturbingly looks like a locust, imo):

Posted at 04:25 AM in Clothing & Accessories, Technology & Entertainment | Permalink | Comments (0)