Anyone who is a dog owner - or simply a dog lover - should read Marley & Me by John Grogan (and the companion web site). It's a heartwarming story about a man and his dog...or more accurately, a family that includes a dog whose personality and presence are larger than life.

Grogan astutely and comically captures moments that every dog owner will recognize, from shedding and slobbering to unbridled energy and unwavering love. Some of the phrases he used to describe his beloved Yellow Lab could have easily been written for my silly Lulu:

with "the attention span of algae and volitility of nitroglycerin"

"darting left-and-right, sniffing, panting, peeing - coughing like a chain smoker as he strained against the leash"

...and the inclination to "love life with a passion not often seen in this world."

As you can see from these excerpts, Grogan is a clever writer and he tells an engaging story about life with Marley; but more valuable than his walks down memory lane are the life lessons he learned from Marley which he shares with his readers:

Never slow down, never look back, live each day with adolescent verve and spunk and curiousity and playfulness. If you think you're still a young pup, then maybe you are, no matter what the calendar says.

It's such a great quote, and with it all the other qualities dogs possess that we humans so often lose sight of: living in the moment, following your heart, finding joy in the simple things, loyalty and devotion.

Here's to the dogs!

We do a lot of B2B marketing at PARTNERS+simons, which means reaching out to on-the-go, mobile-device-toting professionals.

What's black and white and read all over? The answer to this limerick used to be "a newspaper." Today it's the Blackberry.

This great update to the old joke is attributed to Steve Rubel, who discusses the Blackberry as a marketing medium on his blog Micropersuasion, and why its tiny screen may be more valuable real estate than the back page of the Wall Street Journal. 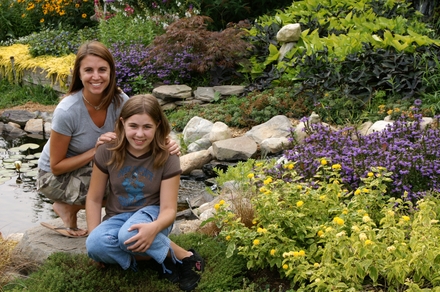 I visited a fabulous spot in Plaistow, NH, over the weekend: Goudreault Farm & Greenhouse, owned and operated by Goudreault family (Richard and Lucine, with their daughter, Deborah), who have been farming in New England for about forty years.

The one-time dairy farm with a small vegetable stand is now a sizable greenhouse operation offering annuals, perennials, and a variety of vegetables from tomatoes and hot peppers to cucumbers and sweet corn. They also have an assortment of local jams and spreads, hand-made pottery, garden fixtures, and antique farming tools for sale.

The best part of the trip (aside from the delicious corn-on-the-cob) was the beautifully landscaped gardens and the farm animals. The flowers and lily pond (complete with goldfish) were beautiful, and the animal menagerie (horses, cows, chickens, plus a sheep, a goat, a bunny, and a Bassett Hound) was a hoot.

The pot-bellied goat was my favorite: he came running out to greet us and bleated desperately in hopes we'd drop one of our fresh corn cobs!

Shawn took a bunch of great pictures...be sure to check them out.

PARTNERS+simons recently enjoyed a Summer outing to Thompson Island, one of the dozen or so islands in the Boston Harbor that is open to the public.

In the early 1600s, this particular island was used by Scotsman David Thompson as a trading post for exchanging goods with the Neponset Indians. In 1833, the island became home to a school for orphaned boys, famous for being the first vocational school in America (it had wood & print shops) and home of the first school band.

Today the island is home to the Willauer School, the site of an Outward Bound program that brings together more than 5,000 students and adults each year, and a nature retreat for local Bostonians.

Feverish Firefox users at Oregon State University have created the latest in a string of guerilla marketing tactics for their beloved browser: a crop circle in the shape of the Firefox log now appears in an oat field near Amity, Oregon. The oat logo was planned in two weeks, completed in under 24 hours, and has a diameter of 220 feet: 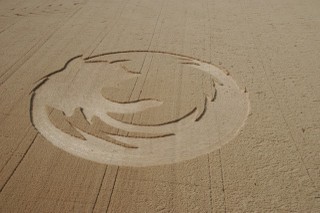 [this post originally appeared on the PARTNERS+simons blog, and I received a nice email from Dave Birss, the Creative Director, at McCann Worldgroup in London who developed the campaign]

Today I received (another) forward from my Mom. She's retired, and wired, and is a big fan of the inspirational PowerPoints, funny jokes, and humorous videos that pass through most of our inboxes at some point or another. This one was actually quite enjoyable (thanks, Mom!), and turned out to be an interesting case for viral marketing.

Called FingerSkilz, it's a short video of a man's hand painted to look like a soccer player, performing various tricks with a "soccer ball" made from a wad of masking tape.The scene plays out on a desktop, with a PC in the background and a trippy electronic soundtrack. See for yourself:

The opening and closing screens reference www.fingerskilz.tv, so of course I checked it out. And lo and behold...this humorous clip is actually part of a global marketing campaign from Hewlett Packard, one that has successfully gone viral (as evidenced by my Mom's receipt of it, and subsequent forward to me). In fact, the campaign's been around since May, no doubt to coincide with the World Cup activities, and has been viewed over 24,000 times on YouTube and countless other times on other blogs and via email forwards (where have I been?).

The companion site is authored by David B., the gent with the finger skills, and is heavily branded with HP's The Computer is Personal Again campaign. It links to a UK microsite that touts HP's ability to deliver personalized service, because hardly anything you own is more personal than your computer.

I applaud HP's effort for two reasons: (1) I think the campaign execution is elegant: the notion of putting the "personal" back into "personal computer" and developing a campaign around how individuals view their PCs is great (that concept alone begs for consumer-generated media); and (2) their use of the hand silhouette and the tie in of the FingerSkilz video ads an element of fun & hipness to a brand that may otherwise be considered dry or stodgy. They've leveraged the latest techniques (video, blogging) to successfully spread the word. They've solicited ongoing relationships with their viewers by including RSS feeds and email opt-ins throughout. And of course they've inlcuded the ubiquitous "send to a friend" functionality to help it go viral.

I was curious to see how many viewers of the video actually visited the URL and learned that HP was behind it, or more importantly, stuck around long enough to digest HP's message, so I did a little digging and found some campaign results on HP's blog:

I'd say the viral component was a success, and the brand image no doubt got a lift from the impressions on the blog and the press coverage the campaign received (I know I now view them differently - their blog is pretty good!). I'd still like to know how many FingerSkilz visitors actually clicked through to the HP microsite, or how many opted in to receive more info on their products, but I guess for now I will have to settle for learning how to become a finger footballer star!

In yet another example of the growing trend towards more targeted and trackable marketing programs, Epsilon Interactive has published findings from its recent B2B Marketing Report. The survey of 175 majore marketers yielded the following highlights (as noted in 1to1Media):

While few would question the rationale behind highly targeted marketing programs, putting them into market requires the patience to dissect your audience data to understand their unique needs and media consumption habits, and the diligence to repeatedly test, measure, and optimize your programs over time.

The good news is that today's marketing technology platforms can help support development of these types of targeted programs, and the customer insights and unique creative development they yield can be invaluable.

Last night I visited Rendesvouz, a newish restaurant in Central Square. It occupies a former Burger King spot, which is oddly apparent the moment you enter; see the sloped glass ceiling at the front of the dining room and the open kitchen at the back: 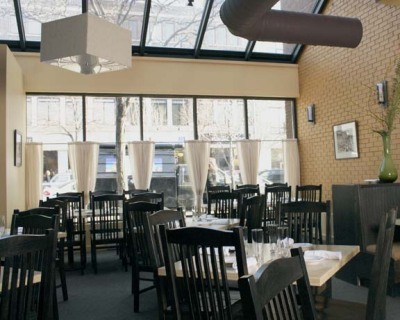 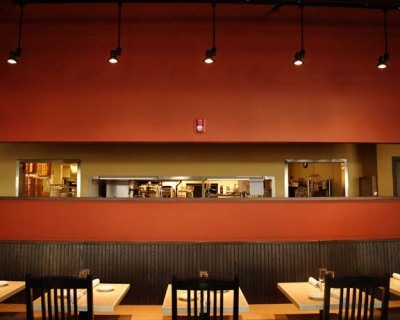 While they've spruced the place up with low lighting and a rich paint job, it still had a bit of an odd, quick-serve restaurant feel (they should really rethink the view-through kitchen idea, because that adds to it).

Design oddities aside, the menu, service, and food were superb. We started off with a crisp bottle of L'Ecole Semillon and a few slices of fresh country bread, just like they serve in France: crusty on the outside and chewy on the inside. In fact, the little French touches - like the linen dish-towel napkins - almost made me forget we were dining at the former BK Lounge.

But then the real food arrived...and this is no burger joint. Thanks to the prix fixe special they are running throughout August (Tuesdays only?) I was talked into a 3-course feast, starting with a delicious summer salad (thin cucumber slices, black olives, tomatos, feta, and lots of mint), then moving to a roasted chicken breast with green beans and new potatoes, and wrapping up with a fluffy-lemony-pudding concoction. My friend started with a tuna ceviche, moved on to haddock in a basil/pesto/olive broth, and finished with an orange polenta cake with berries. The prices were reasonable and each course was absolutely delicious. Our server was also great - she was super attentive and knew the menu (and recipes!) inside out.

Rendevouz's website is also pretty interesting: it's a blog. On it, they provide standard restuarant site fare (location, hours, reservation info, etc.), plus the wine list, recipes and info on creators of the art work currently gracing their walls. But because it's a blog, management can easily update the content (as menus or artwork changes), and patrons can easily leave comments. Although the navigation is wonky on the secondary pages, and the restaurant name is conspicuously absent from the header, it's kind of a nice approach.