Toronto ad agency Lowe Roche has launched a funny new campaign for the Toronto Zoo that uses guerilla marketing tactics (no pun intended) together with both traditional and emerging media. 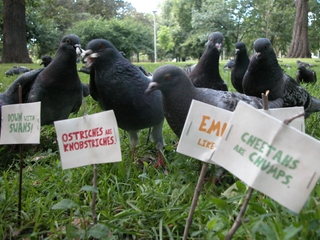 It's the ostriches that really annoy Jealous Pigeon. He refers to them as knobstiches. "They are birds, but they don't fly. They have ridiculously small brains," J. Pigeon explained last week in an e-mail interview with the National Post. "I mean, yes, they can run really fast, like 70 km/h or something, but does that make them extraordinary? Does it?"

According to Jealous Squirrel (also speaking via e-mail), the group was started by Jacob, a visionary pigeon. "As the story goes, he was in High Park when a group of humans walked by raving about the zoo's extraordinary animals," he recalls. "Jacob, insane with jealousy, took flight and pooped three times on the humans." ...Unsuspecting zoo-loving humans can expect more of this sort of carpet bombing as the J.O.A.A.T.T.Z.E.A is planning jealousy-fuelled pooping and nut-throwing attacks throughout the summer. The campaign also includes TV spots, a website (slow and not quite as funny as the other executions, but does includes links to the zoo site, which they refer to as "Dorksville"). Jealous Squirrel has reportedly even created a MySpace profile to raise awareness of his cause, but I haven't been able to find it...