I finally dined at the Red House in Harvard Square, a charming restaurant that occupies a former residence built circa 1802.

It still has the original wood floors stooped architecture (read: low ceilings and doorways), and fireplaces in what are now a series of private dining rooms, as well as a more modern bar area, outdoor patio, and main dining room. I dined in the Delft Room, so named because it is adorned with authentic Delft Blue ceramic ware from owner Paul Overgaag's hometown of Delft, Holland. 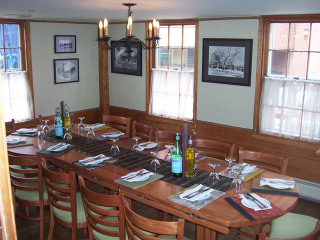 From their web site:

First built c. 1802, this modest four-room cottage was home to the widow Susannah Cox, changing hands just a few years later to the widow Elizabeth Hicks. Since then, the house has been known as the Cox-Hicks house. Located in the earliest settled section of Old Cambridge, the red house is situated atop an ancient stone retaining wall that dates back to c. 1634. In its initial years, as now, the house sat at the heart of a bustling neighborhood which included the nearby Marekt Place, the Jail House, several shops, taverns, and a blacksmith shop.

Over the last two centuries, the house has changed hands several times. In the most recent years, Harvard University utilized it as office space before selling it in the early nineties. Five years ago, the house was purchased by its present owner, Paul Overgaag. Paul, a long time restaurateur in Harvard Square, dreamed of restoring the house and transforming it into a European style restaurant with historic charm.

Paul has since restored both the interior and exterior of the original structure to its former beauty & simplicity. The original rooms of the cottage at 98 Winthrop Street are now used as space for private dining. Each room features authentic period detail, working fireplaces & original wood work. Paul has also built a contemporary addition on to the rear of the structure. The addition houses a small bar area, a 55-seat dining room, and a brand new state-of-the-art kitchen. 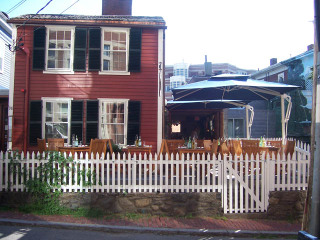 The food was excellent; described as "European," the menu boasts a wide array of salads, hot and cold appetizers, and entrees. I enjoyed a duck salad to start, followed by a linguini and bacon dish.