Advertising.com hosted a fun BIMA networking event last Thursday night at Lucky Strike Lanes in Boston, and PARTNERS+simons put forth a stellar team of bowlers to compete against other local agencies. 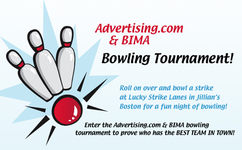 Members of the P+s Pinheads include:

The evening was a lot of fun and our thanks go out to the organizers. See more pix here. (This entry is cross-posted at Simonsizing.) 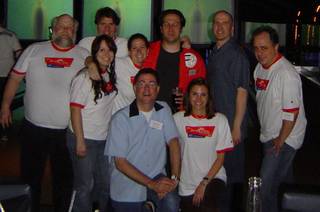 [originally posted on the PARTNERS+simons blog]

A colleague pointed me to this clever ad campaign from Nationwide Insurance, which I think does a great job of getting consumers to interact with the brand.

Building on the tagline Life comes at you fast(R), Nationwide has launched an eponymous web site where visitors can upload their own photos of people living life. The microsite urges: "Think big. This is New York. Propose to your partner. Say your sorry. Tell your husband, 'we're pregnant.' Do something that says, 'Hey, world, life comes at you fast(R)."

Nationwide will then select winning entries to be broadcast live on a billboard in Times Square. The site is complete with a countdown clock showing the hours until the next winning entry will be displayed, as well as the requisite links to Nationwide's portfolio of services (investments, retirement, and insurance). And of course, all entrants are required to provide names and contact information (for winner notification) and given the opportunity to opt in for more info from Nationwide.

Kudos to Nationwide for pulling off such an elegant campaign. The site is easy and fun to use, and the messaging is so on brand: highlight the people and things that are important to you in life...and then think about whether your well prepared to care for them.

Shecky's culture & lifestyle newsletter shows us how we can indulge our inner carnie: by enrolling at the Coney Island Sideshow School (who knew?!).

For $600 one can learn all the secrets of the sideshow trade, including snake charming, sword swallowing, and magic!

It's a little unnerving that they have a Hold Harmless Agreement (indemifying instructors from any and all claims, actions, suits, etc., arising out of participation in the school) prominently displayed on the home page, and a requirement for any enrollee. 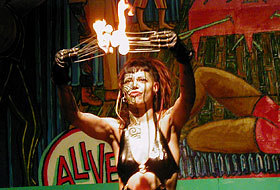 Direct Magazine has a nice article about a blog our firm helped launch recently, HearingMojo.com, and how this medium is becoming a valuable channel for real community building and information exchange (rather than the personal rants that defined the early days of the blogosphere).

The site is the brainchild of David Copithorne, a long-time friend of Tom Simons who saw the need for an educational, informational, and supportive resource on hearing loss after he experienced it himself first hand. Check it out for product reviews, industry news, and coping strategies, all in a vendor neutral, Web 2.0-friendly destination site. 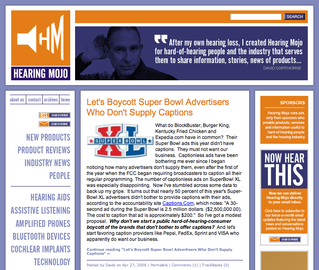 This post may also be found on our corporate blog, Simonsizing.

This dance video clip is hilarious...and wildy popular: it's the #1 most viewed and top-rated video on YouTube. I can't believe I haven't seen it before now. And the star of the clip, comedian Jud Laipply, is performing his act - and the dance - live at the Lounge at 33 tonight.

I love to see new uses for technology, but this one's kind of nerve-wracking.

According to the Boston Globe, area police are launching a crime alert system whereby residents in certain test districts (Dorchester, South Boston, Roxbury) may register to receive emails, text messages, or faxes when crimes are committed in their neighborhoods.

The project between Boston Police and CitizenObserver.com is intended to quickly disseminate info about crimes in order to alert the public and engage those most likely to have relevant information for solving the crimes. Residents can send anonymous electronic tips back to the police (although I don't know how that works...they could identify you by your cell phone number or email address, right?). The first post detailed a Sovereign Bank robbery in Southie, and included images of the suspected robber and related evidence.

Locate your city and sign up for the service here, unless you decide that ignorance is bliss.

I recently became a big fan of the HBO series Entourage, having watched both the first and second seasons back-to-back via on demand. It's a fun show that follows a young actor trying to make it big in Hollywood, with his childhood pals in tow. 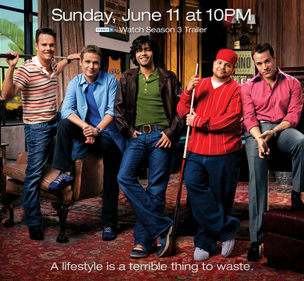 To promote Season 3, which premieres on June 11th, HBO has created a brilliant tie-in with networking site MySpace whereby fans are encouraged to build their own entourage and vie for stardom. Fans recruit their most popular friends, create a MyEntourage page, and then promote themselves (just like the boys on the show). It's basically a big popularity contest, with HBO choosing the finalists and the MySpace community voting for the winner.

And to the victors go the spoils: a Chrysler Crossfire for each member of the entourage, a VIP trip to LA, XBox 360s, Samsung phones, and more. The campaign is so perfect for the show, and it seems to be taking off: as of this writing, the Entourage profile page has 19,650 friends.

We have New York interactive agency Deep Focus to thank for all the fun. This is the same shop that developed the Google Maps mash-up for the season premiere of the Sopranos. For Entourage they've taken the promo a bit further, however. Besides the MyEntourage component, they've developed the microsite InterviewwithAri.com, which uses artificial intelligence to let visitors "interview" with the show's hilarious agent, Ari Gold (magnificently played by Jeremy Piven). They've even included a few easter eggs for Season 3 in the dialogue. And it doesn't end there: Deep Focus is working with Xbox 360 and Xbox Live to create hi-def, Entourage branded content directly to gaming consoles.

An overview of the campaign, including an interview with Deep Focus, appeared last week in Adotas.