Google is helping Sony Pictures promote its upcoming big-screen release of The Da Vinci Code by offering a series of DVC-themed quests on the Google personalized homepage portal: 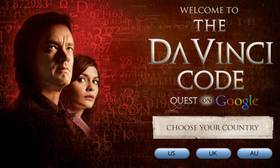 The adventure begins on April 17th and lasts 24 days, during which people play for a chance to win trips to some of the movie's filming locations (Paris, Rome, London) or a Sony Electronics package.

Google's in it to promote its personalized Google start page (available to all gmail users); when you attempt to play the game, you are prompted to log in or create a free account. Once you get that out of the way, Google drops a DVC widget onto your start page (which currently clicks through to the Sony Pictures official movie site, until the game begins). 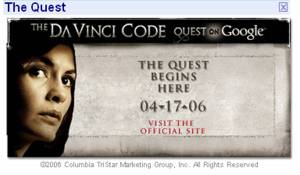 It's a smart tactic on Google's part; I for one have a gmail account but have never looked at nor used big G's start page. So now I've at least looked at it; the game will need to be pretty compelling for me to go back to it for 24 days in a row. It's doubtful that I'll switch to Google start as my default, having been a long-time Yahoo start page user and just recently switch to Netvibes. But I do hope that Google has woven numerous opportunities to use Google search (and maps and whatever else they offer) into the game itself...that would be really smart.

I'll just have to wait to until next week and see. Da Vinci Code the Movie hits theaters May 19.

Another way of allowing customers to choose the way they want to engage with your brand and generate some excitement...hopefully. :)