Chevy CGM Backfires - Or Does It?

The fears that so many marketers have expressed about consumer-generated content has finally been realized. What happens when we are no longer brand guardians but brand hosts? When we allow consumers to generate ads, movies, and other media in support of - or against - our brands?

GM's Chevy brand had a taste of what can happen when a recent entry to its latest Apprentice promotion depicted the new 2007 Tahoe as a gas-guzzling beast that will destroy the environment. And it made it live, on the site, for all the world to see: 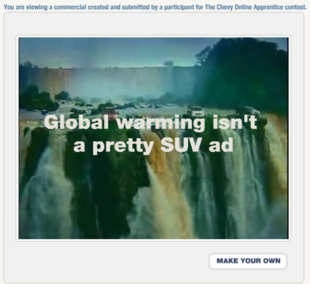 Be sure to take it all in now because...

Tomorrow this asshole's SUV will change the world

It's a frightening reality

Yikes. Chevy hit on a good idea when they tried to up the ante on their last wildly successful Apprentice promotion by combining it with the latest trend, CGM. But I imagine this is not what the Chevy Ad Director had hoped for by way of social persuasion and collaboration.

I'm interested to see how Chevy handles this one: whether they'll pull the CGM ad down or allow it to run indefinitely. The campaign has received a ton of press from the start (from Jaffe Juice, Micropersuasion, and Autoblog among others), and this latest turn of events is only going to add to the buzz. In fact, the viral nature of this event may get images of the 2007 Chevy Tahoe in front of more people than it would have been exposed to on a normal day.

Chevy would be smart to use this one to its advantage: don't pull the ad down, but run an accompanying piece that acknowledges the concern. Create a video that says, "You're right. Saving the environment is critical, and we know it's an important issue to many people. Including our customers. That's why GM is at the forefront of developing alternative fuels with its E85 program..." You get the idea.

If you're going to play the CGM game, you need to embrace all the players. Even the negative ones can provide valuable insights into your target audience, and help you fine-tune your approach to overcoming barriers. That's the power that this two-way dialogue creates.

UPDATE: Chevy deemed the campaign a success, despite the negative buzz, when it announced these results on April 4th: Users have submitted more than 21,000 ads and have emailed ads over 40,000 times; the site has generated 2.4 million pageviews; and the average visit to the site lasts more than 9 minutes.

I love that the blue/brown color pairing trend which appeared back in 2002 is making a resurgence again this year. It's been a favorite of mine since I stayed in a condo at Mt Tremblant that was completely - and beautifully - decorated in shades of both.

Aside from being pleasing on the eyes, I suspect that the pair continues to be a popular choice because of the feelings & images they evoke. Blue is calming and casual; think sky, cool ocean waters, beach houses (all pleasant thoughts as we eagerly anticipate the arrival of warm Spring weather!). Brown is unifying and dependable; it's a "safe" color that is often used to balance out more daring choices; think earth, wood, coffee.

Together, blue and brown are quite versatile; from a decor standpoint they can be classic or quite modern. A quick scan of the Spring catalogs reveals the pair prominently featured in the living room, bedroom, bath and outdoor categories: 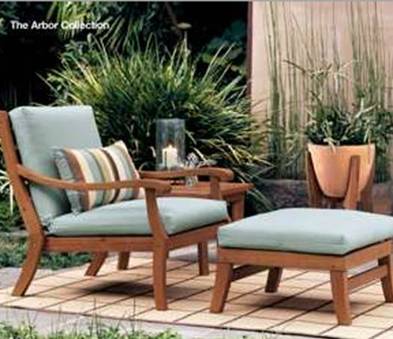 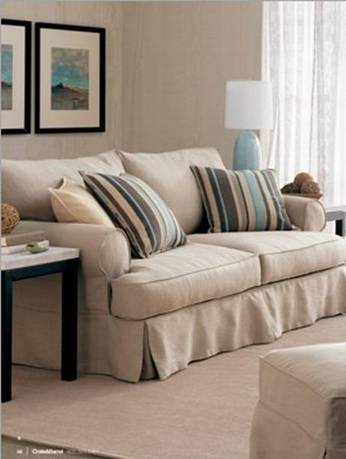 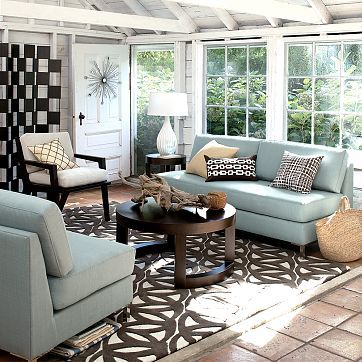 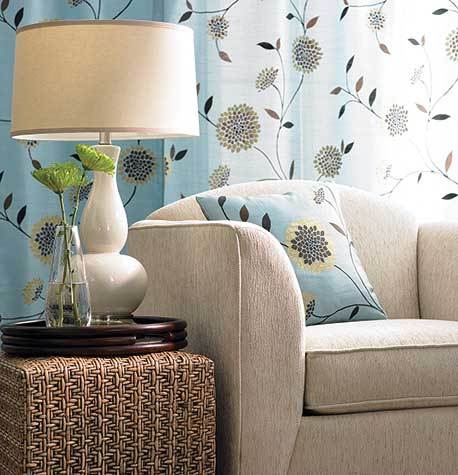 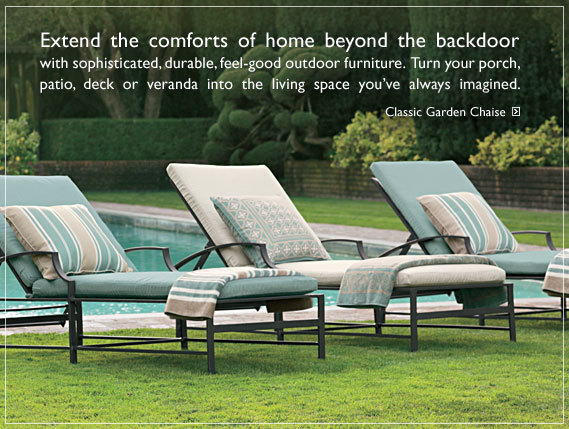 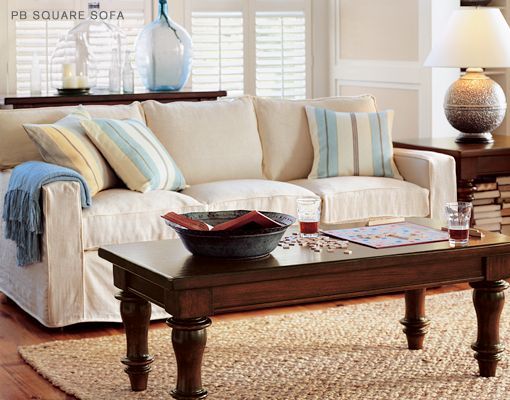 As social trends continue toward more fragmented attention spans, escalating terror threats, and natural disasters, it seems logical that people would be drawn to the calm, cool & collected image this combo projects.

Awhile back I read about Volkswagen's experimentation with using Google Maps in its onboard navigation systems.

How long will it be before someone deploys a mashup of Zillow.com (aerial maps + home values) and say, Zip Realty (home overviews, open houses, neighborhood info, etc) - directly to the dashboard?

It would make for much more productive house hunting.

I'm excited to announce that I have accepted a new position at PARTNERS+simons as Director, Interactive Strategies.

P+s was founded in 1989 and is one of the largest independent advertising communications firms in New England, providing a variety of cross-media marketing services to its clients in six business categories: technology, healthcare, life sciences, professional services, financial services, and consumer/retail. They take a media-agnostic approach to branding and demand generation initiatives, melding both traditional media-based communications with direct and interactive methods.

I will work closely with P+s leadership to further develop the firm's digital offering, cutting across their entire client base (which includes companies like Blue Cross Blue Shield of Massachusetts, EMC Corp., Genzyme Biosurgery, Boston University School of Management, and Sovereign Bank - read about this latest addition here).

It's a wonderful group of seasoned professionals that are doing really great work...I am eager to join them!

And lest we forget some of the fun that was had at Digitas, I've assembled some pix here.

Laughter Really is the Best Medicine

The girls over at The Weekly Beet have posted

Read the full article here and then get laughing!

This week, I finally paid a visit to Atasca, a great Portuguese restaurant on Hampshire Street in Cambridge.

This frequent Best of Boston winner has an extensive menu of authentic Portuguese cuisine, thanks to proprieters Joe and Maria Cerqueira, who hail from Arcos De Valdevez (in the Minho region and mainland) and Graciosa Island (in the Azores), and a chef from Madeira. In fact, the Cerqueiras return to their homeland at least once a year to visit family and friends, as well as get new culinary ideas for their restaurant.

Like the staff, the casual interior is warm and inviting; there is a beautiful display of traditional Portuguese pottery on the walls and lively music in the background. The food was delicious and the prices extremely reasonable. I enjoyed the Peito de Galinha com Queijo S. Jorge (boneless chicken breast sauteed with S. Jorge cheese, linguica and wine, served with broccoli rabe risotto; Jeremi had the Bacalhau de Cebolada (baked dry salt cod with carmelized onions, roasted peppers surrounded with home fried potatoes; watch out for the bones!). Both meals were excellent, and we of course raised a glass of Portuguese red in honor of the ol' Rogers clan who originally hailed from Terceira in the Azores.

I need to go back to sample some of their other regional specialties (marinated pork medallions, home cured ham, stewed fava beans with onion and garlic, sangria...); they also have a sister restaurant called O'Cantinho on Cambridge Street. 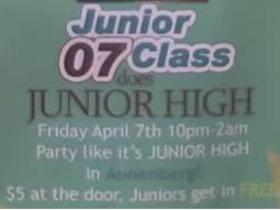 Saw this flyer posted in the Harvard quad this morning.

PSFK has posted an interview with Sacha Lewis, co-founder of "cultural destination" site Flavorpill. With a tip of the hat to Richard Florida's The Rise of the Creative Class, Lewis has set out to create an online collective of cultural news, reviews, and events. From the interview:

' - this a group he estimates at over 40 million people in the US alone.  These are artists, publishers, designers, etc  who all use creativity in their work and often fuel economic and social trends to the mainstream.    This class is the driver of our community -they are engaged, want to participate and importantly they embrace technology. One of our goals at Flavorpill is to stimulate this community and eventually appeal and covert the mainstream. Publications like Flavorpill and PSFK are ahead of the curve - we're seen as thought leaders for the Creative Class so it is shared our opportunity to expand peoples minds with dynamic, quality content.

The Worldwide Library Cooperative has posted the Top 1000 titles owned by its member libraries. How many have you read?

There is an unassuming brick building on my street, covered in ivy like so many others in New England. Out front is a simple sign that reads, "Moshe Safdie and Associates."

For nearly a year I passed by this building, noticing that it was some sort of office, and that workers seemed to be there at all hours, any given day of the week. When curiosity finally got the best of me, I Googled the name on the sign, and this is what I found:

Moshe Safdie is a world-reknowned architect. Born in Israel in 1938, he later moved with his family to Canada where he graduated from McGill University with a degree in Architecture in 1961. He has designed a wide range of structures, including residential complexes, cultural and civic centers, and public and academic institutions. Among them:

Over the years Safdie has taught at Yale, McGill, Ben Gurion University, and Harvard Graduate School of Design. He joined the latter in 1976, when he set up the nearby office where it remains today. He has also authored/edited several books, and there is an online archive of his work that is maintained by McGill University. Quite an impressive body of work!