The 'Urge' for More Downloads

MTV and Microsoft have joined forces to create a new music download service, dubbed Urge. Designed to compete with Apple's iTunes (or, as PSFK cleverly notes, "MTV Launches Pepsi to Apple's Coke"), the service is scheduled to launch in early 2006 with downloadable music videos, songs, and television programming. It will be integrated into Windows Media Player, which currently includes links to Rhapsody (part of RealNetworks Inc.) and Microsoft's own MSN Music....and one has to wonder about potential mash-ups that could occur with other Microsoft applications (traditional Office products, XBox Live).

Despite Microsoft's huge embedded base via Windows Media Player installations, I'm skeptical that they will compete any time soon with first-mover Apple; consider:

There are rumors that Urge will have elements of an online community baked into it, but one could argue that Apple could easily move into that direction if it wanted to; it has a very active and loyal iTunes subscriber base that provides the makings for a more robust community. MTV also recently purchased iFilm, adding even more content to its already hefty stable of digital programming. But I'm still not convinced. I do think this leads to a larger conversation around convergence and advertising/marketing opportunities across different platforms, but I will save those thoughts for another post.

The bottom line is it's a huge market, reportedly worth $765 million today, and expected to top $3.4 billion by 2009, according to Veronis Suhler. There's likely room for multiple players, and indeed Apple and Microsoft must share the market with subscription services like Napster, which have their own loyal followings.

As with any successful product category, competitors will sprout up to capitalize on a good thing. That was the case when BlockBuster entered the booming DVD home-delivery market long after Netflix had established itself. And in that particular competition, I also sided with the first mover: I've had a long and fruitful relationship with Netflix and wouldn't consider switching - not even for BlockBuster's originally lower price - unless the quality of Netflix's service drastically declined. I've simply invested too much time with them at this point to switch - I'm set up for automatic billing, they know my preferences, and the service is supurb.

With MTV and Microsoft as backers, I'm sure we'll see a huge media push for Urge in the early part of '06, something that Apple has probably never seen the likes of; it will be interesting to watch how this rivalry plays out.

December birthday shout-outs go out to:

My sister, Stacey, who is celebrating her big day on the 14th...

...and my nephew, Stephen, who is celebrating on the 15th.

Happy Birthday to both of you!

Our friends over at VivyLand have created a 4-minute long Flash video called, "Why I love my bulldog" that is just adorable...especially because it has tons of pictures of our own Howie throughout!

VivyLand is the brainchild of Jan Oswald, a still-life photographer that acquired her own lovable bully (Vivy) in 1994. Vivy soon became the subject of Jan's photos, and thus began her quest to "capture the unique character and personality of the bulldog breed as expressed through Vivy." Today, Jan runs a popular website on which many of her Vivy images are available for sale - in the form of greeting cards, books, t-shirts and more. The site also has a wealth of information on the breed, and a link to Jan's bulldog blog.

Jan recently sent out an appeal to all of the bulldog-lovers that subscribe to her email list, asking what we love about our bulldogs. The resulting images and words were then compiled in this video. Check it out (the "slower processor" version works just fine if you're having trouble) and see Howie at the airport the day we brought him home, asleep on the couch, sunning his rear-end up against the window, and playing outdoors - plus tons of other great photos and comments from other bully owners.

Thank you for this wonderful video, Jan!

Years ago I subscribed to a little-known email newsletter called DailyCandy to get the latest scoop on arts and culture, dining, travel, and fashion tips coming out of New York City. It was created in 2001 by a 28-year-old woman named Dany Levy that had spent years working in the magazine publishing business before leaving to pursue an MBA.

While studying for her GMAT and preparing for B-school, Levy subscribed to Web sites like a.word.a.day.com and TheStreet.com, which gave her the idea to start a similar daily publication - focused on lifestyle.  Her mission, according to a WWD article was to "weed through the schlock on the Internet, to follow up on the restaurants you read about in `Dining Out' or the books they write about in Harper's Bazaar." In other words, she was one of the early trend spotters: your in-the-know friend who told you about the latest must-have fashions, must-visit restaurants, and must-see show openings.

And for a long time, that's exactly what Levy delivered: content with a hipster edge, accompanied by whimsical visuals supplied by NYC-based illustrator SueJean Rim, responsible for the adorable Boston Terrier at right which made an appearance in the recent DailyCandy Boston edition (I have a special fondness for him because he looks like my Frenchie, Lulu).

But that was then, and this is now. As DailyCandy's popularity grew - thanks to strong content and a loyal fanbase - it moved farther away from its cool-hunting roots and well into the mainstream. I'm not sure exactly when the content took a turn for the worse, but it's tied to these major changes in the model:

First, I recall the content getting watered-down around the time that multiple city versions were released. I have to think that there's enough exclusive lifestyle information out there from each of these cities, but with the volume came new writers & editors that maybe couldn't perpetuate the unique insights and voice that Levy herself delivered.

Second, Pittman's focus on turning DC into a revenue generator threw the paid advertising doors wide open. The newsletter began renting its list to advertisers who wanted to get their brands in front of this coveted audience via dedicated emails. No sooner than the new publisher came on board did we start seeing emails from the likes of JCPenney and Sears. And while I recognize that editorial and advertising are as separate as Church and State, I have to admit that in my mind this tarnished their brand (in the cool-hunting sense; read any of the number of rants about Walmart's decision to advertise in Vogue for a similar idea).

I've been a loyal DailyCandy reader for a long time, and will probably remain on their subscriber list out of habit...but I yearn for the days when it was like an exclusive little club.

I've found a new treat to satisfy my ever-needy sweet tooth...and this one is much healthier than my normal array of cakes, cookies and candy bars! I'd like to introduce you to Barry's Bakery French Twists - crisp sticks of sweet puffed pastry that come in a variety of flavors, including Cafe Mocha, Wild Raspberry, Maple French Toast, Almond, Key Lime and Chocolate Chip.

These diet-friendly snacks are most popular for what they're lacking: cholesterol, eggs, butter, and yeast. Plus, they're low-fat, low in sodium, and contain only 60 calories per twist. All that and they taste great!

French Twists are the brainchild of Barry Yellen, who suffered a major heart attack at the age of 42 and was shocked into improving his diet and lifestyle. He, too, found it difficult to cut sweets out of his diet entirely, which led to the development of these handmade, oven-baked delicacies.

I bought my bag (Cafe Mocha flavor) at Shaws Supermarket, but you can also locate a retailer on his website or buy them at his online store. Enjoy!

Retailer Nordstrom has taken an innovative new approach to pushing its wares: it has created a broadband entertainment channel dubbed Nordstrom Silverscreen which features designer clothing, shoes and handbags all available for sale at Nordstrom.com.

Where's the innovation? All of Nordstrom's merchandise appears within old-school music videos (think Culture Club's I'll Tumble 4 Ya and the Go Go's Our Lips are Sealed) that have been re-mixed to include a new cast of characters who are all dolled up in today's latest fashions.

Created by Fallon and delivered via Maven Network's video player, the application delivers DVD-quality content to your desktop. Users simply visit NordstromSilverscreen.com to download the player, and receive monthly notifications when new content becomes available. Fallon is also promoting the service via Nordstrom's opt-in email list and in select other channels.

Users can watch the video, see behind-the-sceens clips from its making, and interact with the merchandise in the "mixing room" - where they can mix and match outfits and send to a friend. It's a fun way to combine music, fashion and technology to engage prospective shoppers; what's more, viewers are just a click away from purchasing the items featured in the video directly from Nordstrom.com.

Domino Magazine has a great feature called Inspirations where they find ideas for room decor based on a painting or favorite outfit, for example.

In the November 2005 issue, the editors turned to John Singer Sargeant's painting of Lady Agnew, at right, as inspiration for an "aristocratic but livable bedroom that is similarly elegant without being too proper."

How did they do it? Lady Agnew's white, billowy dress inspired the central focus of the room - a luxe white bed ensemble with ruffled pillows. Her lilac sash is represented by curtain tiebacks, while the bluish background in the painting is transformed into ornate blue wallpaper in the bedroom. Black laquered furniture - a bureau and side table - ad to the dark, moody image in the portrait. Lastly, they added silhouettes to the mantle to represent the lady herself, and a floral bedspread like the chair she's sitting in.

I love the end result - take a peek: 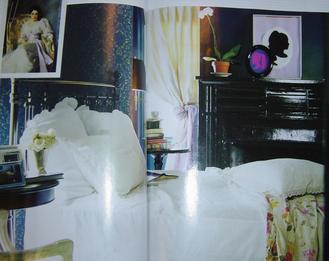 At 36 Atherton Street in Somerville, MA, there is round house which dates from 1856. I am fascinated by its architecture and history, and saddened by its state of disrepair.

According to the Somerville Public Library, the 40-foot diameter Round House was built as a curiosity by a prominent inventor and locksmith, Enoch Robinson. It contains a glass-domed central hall and two parlors: one circular and one oval. The Somerville Old House Organization (SOHO) has a nice write up on the place, including a rare picture of the interior, seen at right.  In it you can see sections of the parlor walls, which Robinson covered with a French scenic paper depicting royalty in castles, gardens, and hunting scenes. The shape of the house itself has been traced to one built in the Desert de Retz in Chambourcy, France, in 1780 and 1781 by Francois Nicolas Henri Racine de Monville (1734–1797) in the shape of a huge, round, ruined, classical column.

According to the history section on the website of present-day manufacturer E.R. Butler & Co., Enoch Robinson designed and manufactured hardware in Boston from 1836 to 1888. He is remembered for inventing one of the first mechanical glass pressing machines and developing several patented methods of attaching glass knobs to their sockets. Enoch Robinson & Co.’s hardware was very well respected both in Boston and across the nation: the company supplied hardware for the Boston State House and City Hall, and supplied locks and knobs for extensions to the United States Treasury Building in Washington, D.C.

Today, the Round House is listed as a private residence, but appears to be abandoned. The yard is overgrown with wild bushes and weeds, an abandoned shopping cart sits up against the broken-down fence. The Historic Massachusetts Planning Department attempted to negotiate its renovation with the owner in 1997, but she was not willing to give up control of the property. It's a shame that someone has let this beautiful home fall apart. A 1915 postcard depicts the Round House in better days, at left.